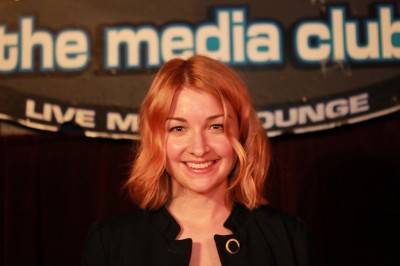 Kate Miller-Heidke‘s second album, Curiouser, is bringing the Australian singer/songwriter some notoriety in North America. This is partly due to her appearances at this year’s Lilith Fair festival but also because of the viral nature of her YouTube hit, “You’re F**king Kidding Me (Facebook Song)”, a laugh-out-loud (all right, LOL) novelty tune about being contacted by an ex who wants to be friends on, well, Facebook.

But Miller-Heidke (and her writing partner/husband Keir Nuttall) also wrote the quite wonderful “Caught in the Crowd”, a Curiouser song that won this year’s Nashville-based International Songwriting Competition (judges of which include Ray Davies, Neil Finn and Tom Waits). She also has an opera background and recently appeared in Jerry Spring: The Opera at the Sydney Opera House.

So she’s more than just a novelty act – though we did spend some time talking about novelty songs when she stopped in Vancouver for a Media Club show Sept 27.

Video: Kate Miller-Heidke, “Are You F***ing Kidding Me (Facebook Song)”:

SC: So the opportunity to play Lilith Fair must have seemed exciting at first, but then as the tour went on and shows were cancelled…

KM-H: Actually, none of the shows I was part of got canceled. We did nearly all the Canada dates, and played to huge audiences, great audiences. They were all warm-hearted, seemingly intelligent people. I feel very lucky considering it was my first ever Canadian tour.

SC: This song, “You’re F***ing Kidding Me” – was everyone singing along?

KM-H: There’s always a huandful in every crowd. It’s more fun to play it to people how don’t know it. If there’s a bunch of people singing along to every punchline that kind of spoils it. That’s the thing about novelty songs, they have a relatively short shelf life. I should write another one.

SC: It can’t be just as easy as deciding to write another novelty song…

KM-H: It’s easy once you have the idea. I’ve always thrown the odd novelty song into my set. I had one I used to play about Australian Idol, because when I first started playing music I had all these people telling me I should go on Australian Idol. It was huge when I was first starting out. Before that I had a song about a guy who talked about himself on a date all night. That’s been retired. Novelty songs get squashed. Although with YouTube, novelty songs never entirely get squashed.

SC: Have you heard any recent novelty songs you like?

KM-H: I heard that “Fuck You” song by Cee-Lo, it only just came out a few weeks ago.

I’m a fan of Tom Lehrer. That’s kind of where it stemmed from. I used to sing a lot of his stuff, like “Poisoning Pigeons in the Park”.

And I like Stephen Sondheim, some of the funny lyrics in his songs. I’m a huge fan of musical theate. I studied opera in university, I was in Sweeney Todd.

SC: Was that good training for coming up with novelty songs and lyrics?

KM-H: Not necessarily. It does give you a highly tuned sense of the ridiculous. Partly because I never learned to appreciate opera on a deep level, with the occasional exception, I had an acute appreciation of the comical elements of it. Much more so than music theatre. I know musical theatre is just as ridiculous but it still moves me on a really deep level.

KM-H: Oh God no. You could not pay me to see that. I’m talking like older movie musicals, like Oliver.

SC: Are there any recent musicals you’ve enjoyed?

KM-H: I was recently in Jerry Springer at the Opera House. That was the best new piece of music theatre that I had heard in a long time. It’s very funny and complex, witty and multi-layered.

SC: How did you come to enter the International Songwriting Competition?

KM-H: My last manager entered it for me. I’m very grateful she did. It’s quite a famous competition around the world. Nearly every Australian musician enters it. Tom Waits, one of my favourite musicians, was a judge, so was Weird Al [Yankovic] – talking about weird novelty songs.

SC: And you just played the Rifflandia festival in Victoria. How was that?

KM-H: It was a wonderful festival, I really loved it. We played the main stage than another show to raise money for the Warchild charity. That was in a room with no amplification. We went to Miniature World, which was brilliant, then came outside, and it seemed like we were miniatures. It alters your perspective.

SC: And you’re involved with raising awareness about human trafficking in Southeast Asia?

KM-H: In southeast Asia it’s education that is the most powerful tool to help people, particularly girls, who follow a stranger to a far away town in the belief they will be off in a proper job when the reality is they’re being duped. MTV in Asia is massive, you go through these completely impoverished towns, but every house has a satellite dish. [Working with MTV’s] a way of communicating with people in danger of being trafficked. I truly think it makes a difference. This particular issue, the way they do it really does help.