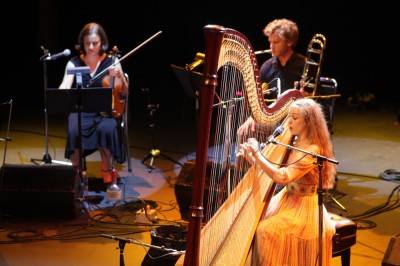 I’ll begin by admitting that I had only ever listened to about seven minutes of Joanna Newsom before seeing her perform. From the little that I heard, I was intrigued by the child-like squeakiness of her voice matched with unparalleled harp skills, a departure from your typical folk revival act. When I entered the Vogue and felt the excited energy of the crowd, I felt even a little foolish for being out of the loop. Thousands of hip Vancouverites were murmuring in the crowds about her unique qualities and their favorite tracks on her newest record, Have One on Me, while others congregated by the stage to admire the glowing finish of her prized instrument.

When Newsom appeared, she glided onto the stage in an earthy peasant dress, rearranged her long locks and positioned her harp in a comfortable position before soothing the audience with a solo “81”, the first of a few Baroque-infused folk songs. Then, her multi-tasking band – including Ryan Francesconi, her fellow composer/arranger and instrumentalist extraordinaire; Mirabai Peart and Emily Packard, on violins; Andy Strain mostly on trombone; and, rounding off the pack, Neal Morgan on drums – joined her onstage. 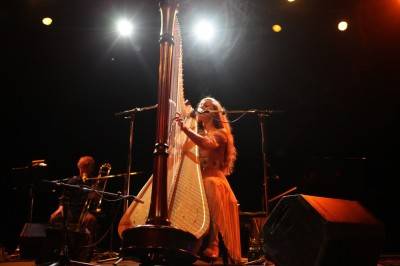 The highly texturized compositions, “Have One on Me” and “Monkey and Bear”. Both unraveled like a winding road, with Newsom’s complex harp melodies and the sporadic musical eruptions from her chamber. Needless to say, these weren’t your typical three-and-a-half-minute, verse-chorus pop songs.Â  Instead, they were unpredictable and diverse, and pointed towards Newsom’s adolescent training in Western classical, Senegalese, Celtic and Venezuelan harp techniques. Her vocal vibrato and intricate phrasing on “Monkey and Bear” even exhibited an East Indian flare.

A few numbers rooted Newsom in the realm of ’60s folk rock, namely, “Easy” and “Soft as Chalk”. Her bluesy piano playing and swiveling vocals brought to mind artists like Joan Baez and Carole King, with the modernist influence of Newsom’s idol, Ruth Crawford Seeger.

Jumping to and from different genres, and juggling different instruments with such ease, Newsom wouldn’t have broken a sweat if it weren’t for the unbearable summer heat. While she fanned herself during a brief intermission, one enchanted fan screamed, “You’re pretty!” to which she replied, “Pretty like a crazy old lady on the bus.”

Fire hazards and uncomfortable humidity aside, the show continued with more experimental songs like“Cosmia”, which allowed Morgan to explore different sound qualities, like tapping on the rim of his kick drum for the song’s irregular pulse. Meanwhile, Francesconi brilliantly plucked away at the tambura, searching for different harmonic possibilities.

Speaking of experimentation, during “Good Intentions Paving Company”, one flighty fan bravely broke out an interpretive dance in front of the stage, while the rest of the seated crowd watched in bewilderment. I don’t blame the dancer – the five-part vocal harmonies and Strain’s trombone solo had me tapping my feet uncontrollably.

Newsom and the band ended with the juicy treat “Peach Plum Pear”, a galloping song that tells a story through its wandering melody and Francesconi’s clever arrangement. It was met with an unsurprising standing ovation and encore. Newsom bid farewell to Vancouver, or as she fondly called it “the Couv”, with the sweet and arresting tune “Baby Birch”. I left the theatre feeling privileged to have seen such a brilliant and novel act, and look forward to the next rainfall of sound that she brings to the city.

One response to “Joanna Newsom at the Vogue Theatre”