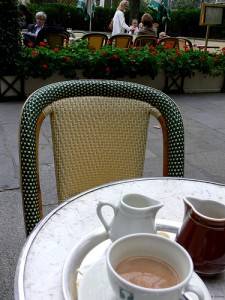 Now, we all know that the French excel in haute cuisine, are magicians in the art of pastry-making and experts in creating ridiculously good wines. Hence, something as “simple” as coffee is taken for granted; a typical French citizen will either have an espresso machine at home or take their morning dose of caffeine at the brasserie downstairs while reading the paper and nibbling on a croissant with the easy elegance that only a Parisian can have. Inquiring about up-and-coming coffee shops and barista competitions, I drew blank looks; the obsession with the perfect espresso shot, the consistency of milk foam and the newest blended drink seem to be specific to the North American continent (and just try and ask for an iced coffee in France!). 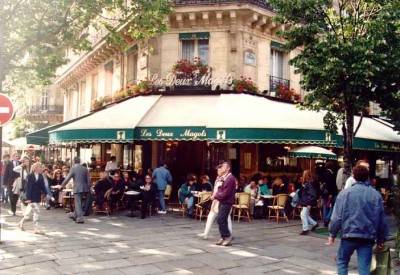 Ambiance: Established in 1933, this famous French cafÃ© is a prime example of an old-school Parisian establishment complete with stern middle-aged waiters, starched table cloths and a menu of bistro classics. Back in the day, it was the meeting place of Parisian intellectual Ã©lite, including the likes of Jean-Paul Sartre, Ernest Hemingway and Albert Camus. Today, you will find a mix of tourists, elegant regulars from the chic Saint Germain neighbourhood, and random voyeurs (such as myself) taking advantage of the expansive terrasse – a perfect vantage point for people-watching. Make sure to take a trip to the loo – the cafÃ© interior is beautiful, with statues of the deux magots (two Chinese commercial agents) adorning one of the pillars.

Coffee: Great quality, as is everything else on the menu, ranging from croque monsieur to caviar and Dom PÃ©rignon. In an attempt to prove that the French don’t waste time on such frivolities as “latte art”, I ordered a cafÃ© crÃ¨me and waited in anticipation. But instead of a plain cafÃ© crÃ¨me (which is basically a latte), I was brought an impeccably presented small silver tray with two carafes – one with an espresso shot and one with steamed milk – an empty coffee cup (with Les Deux Magots logo on it), and a small glass of water.Â  This is apparently the classy way of serving this otherwise ordinary coffee drink. Who knew?