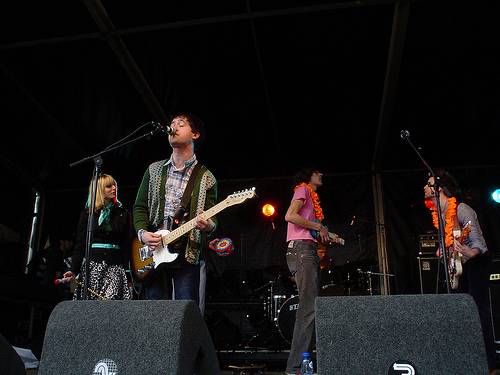 A lot is happening tonight in Vancouver. The annual sploodge-fest Celebration of Light will keep the rabble happy while the Liberal government ass-rapes us; Cirque du soleil’s latest bum parade Kooza is having a special sneak-peak; likewise the Arts Club Theatre with its production of Glengarry Glen Ross, the David Mamet play about cutthroat real estate agents (is such a thing even possible?) and featuring Will and Grace star Eric McCormack; Sweethead and Nico Vega present lead singers competing for sexiest chick singer at the Biltmore; and hip-hop artist Kid Sister vamps to “Pro Nails” is at the Fortune Sound Club.

In the midst of all this hullabaloo, Villagers‘s easygoing-yet-barbed folk-rock stylings can’t really compete. But the Irish band, fronted by the criminally young-looking Conor J. O’Brien, has been racking up some pretty impressive notices for its album Becoming a Jackal. The biggest of these being, the record has been shortlisted for the Mercury Prize.

Becoming a Jackal also entered the Irish charts at #1 and NPR has called it “one of the year’s most captivating debuts.” The New York Times praised its “luminous mesh of acoustic and electric guitars, bass, piano and organ” while Paste Magazine bestowed Villagers with their “Best of What’s Next” honor.

Villagers makes its West Coast debut this evening (July 21) at the Media Club in Vancouver.

One response to “Villagers coming to the Media Club”