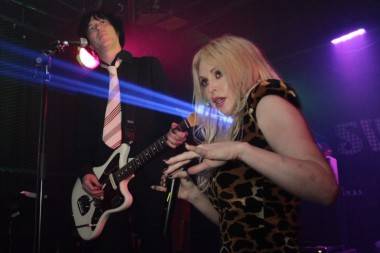 One might have expected Sweethead to pull ’em in, even in a sleepy town like Vancouver. But there couldn’t have been more than 50 souls at the Biltmore Cabaret for the debut of Queens of the Stone Age‘s Troy Van Leeuwen‘s new band – which, besides featuring a member of a tres popular, practically mainstream-in-its-success level stoner-rock act – also boasts a slinky sex-bomb blond lead singer, Serrina. Really, people, are fireworks that fascinating? (July 21 was also the first night of the city’s annual “Celebration of Light” fireworks sploodgefest.)

Too add insult to injury, the apes at Canada Customs wouldn’t let Sweethead bring its merchandise over the border. Oh, Canada. Oh, Vancouver.

Yet none of this seemed to deter the band from putting on a powerful, high-energy set that was just the right length and ended with a perfect closer – a choice cover of David Bowie‘s “Boys Keep Swinging”. The decibel level, meanwhile, was set at “stun” as Sweethead – obviously fortified with QoTSA bucks – pumped out the rock riffs through its arena-ready gear and turned on the smoke machines and lasers as if the group was playing to a stadium.

It might’ve been funny, all the bells and whistles for an audience that could fit in a coffee shop, if Serrina and friends – Van Leeuewen on guitar, Norm Block and Eddie Nappi– hadn’t played with such balls-out conviction. Also Serrina dumped glitter over her head, and slunk around the dancefloor a couple of times. 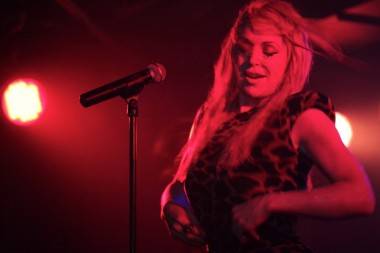 Unfortunately, we missed Nico Vega‘s set, but judging from Skot Nelson‘s photos of the L.A. trio (featuring Aja Volkman on lead vocals and in short-shorts) it was a humdinger. As Jon Chattman wrote earlier this year in a Nico Vega article for The Huffington Post: “Vega stood out last year with their self-titled debut featuring solid vocals, killer hooks, and retro-sexual appeal.” The band may have played to a small crowd as well (not that that stopped them from rocking out), but at least they got their merchandise over the border.