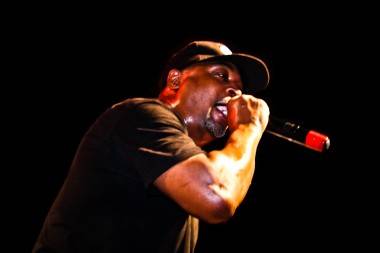 Review and photos–Public Enemy at the Garrick Theatre, Winnipeg, May 21 2010

sometimes beautiful things happen in the heat on a long weekend in My WinnipegÂ sometimes a seriously amazing group like Public Enemy runs into Queen Victoria’s holiday weekend and loses, big,time so we win don’t we?

PE were supposed to play a 1600-seat venue, the gorgeous Burton Cummings Theatre on a Friday night but the heat is on and Winnipeggers having suffered (always suffering) a shorter than typical winter, cold nonethe;less Chuck D and Flavor Flav remembered how cold they felt and found October in Winnipeg the last time they were here. 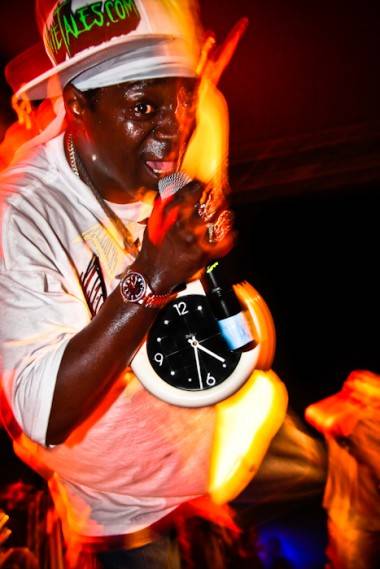 but they like it here in Winnipeg and we felt it we really felt their love if they had played the Burt we the 600 who packed a sweltering (must have been 96 degrees inside a wonderful 68 out, side) wouldn’t have been so close to Chuck D and Flavor Flav

they were always reaching and touching and holding and slapping hands hands holding on we’re touching them they’re holding us dearly fist to fist touching soul to soul reaching 2 hours in a 96 degree venue the sweat pouring and streaming down faces backs we felt them as they touched us and felt us our love they’re love brotherhood and sisterhood one people one nation one world no borders power together peaceful grooving dancing soul to soul heart to heart the message is clear we are a beautiful, our culture of music our language our dance expression our hearts together one united powerful together.

2 hours these 50 year old men danced and shook their bodies and roared their hearts and souls to the foundation built on the Godfather of Soul funk James Brown Flavor Flav’s plane did not land until 10 PM and finally Public Enemy came on stage at 11:20 and these men roared and danced and moved about the stage touching us being with us as we pressed closer and closer to them no need for security there is only Love and Unity we’re one people celebrating music and our togetherness beautiful hearts/ 2 hours 22 songs at least! 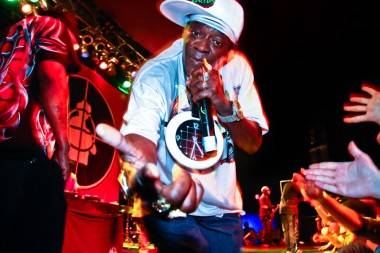 and yes, Public Enemy joins the list of bands who may (and please do) play for more than an hour Bruce Springsteen Neil Young The Weber Brothers Prince to name the immediate few i was wondering if they’d play another hour! they have the songs to play days on end here in My Winnipeg and everyone of us would return night after night after night after night to dance and sing and roar and reach out to touch their offered hands.

Flavor Flav playing his hand to hand mike dance across the stage Chuck D proclaiming his Love for this city, for people who are united in their love for humanity and the culture of music universal language and spirit/ no one left disappointed. we walked up, lifted together united. excited. and yes, hot! my expectations a few days ago were low. “how Low can you go?” Chuck D sang lower and lower and lower.

and then i learned the show was moving to The Garrick from The Burt. and i thought, O My Winnipeg what have we done Public Enemy is the group responsible for the explosion of rap for better and the worse. well, Chuck D and Flavor Flav paid homage to Run DMC LL Cool J and so many more. Maybe it was Run DMC maybe it was Grandmaster Flash maybe it was James Brown’s music, grooves, sampled the samples the foundations of the groove the rap poetry the rhythm of perfect funk meter maybe it’s just music/ the universal language and rap could not be stopped/ so, i thought, PE would never return.

But i believe they’ll be back. to Winnipeg. not in the cold! in the spring or the summer. lowered expectations began to rise and rise and RISE when facebook music loving friends began to chime about recent shows, how hot PE are. and so, i was excited. and ready for the hottest show of the month. of the year? perhaps… just before they came on stage. James Brown James Brown. JAMES BROWN! and i began to boogie. and everybody got into the groove despite the heat draining us. and when it began the soul funk rapping my punk rock soul soared. i was lifted. and beaming. carried. by the love. the pure. the energy. 22 songs contract on the world love jam brothers gonna work it out 911 is a joke incident at 66.6 fm welcome to the terrordome meet the G that killed me show em watcha got bring the noise don’t believe the hype cold lampin with Flavor Terminator X to the edge anti-nigger machine burn hollywood burn power to the people DJ Dynamite Lord!!!!!! (what a sleight of hand diss,play of DJ groove magic) who stole the soul can’t do nuttin’ for you man shut em down can’t truss it rebel without a pause arizona fight the power there were fists pumpin’ to the grooves and live back,beat there were the combat fatigue wearing dancers/ Security (that Chuck D and Flavor didn’t need) there were arms swinging back and forth there was jump,jumping punk pogo dancing really there was so much love,steady grooving hands reaching touching poses struck for all the cameras clicking (Flavor Flav!) there was homage to the great rappers there was the X arms raised for Terminator X their DJ prior to DJ Lord and there was sweat so much sweat and water being thrown on us! there was little 7 year old Micah (was this his first concert? how cool would that be!) on the shoulders of his dad and Flavor Flav taking Micah on stage and talking to the little man and us about what we need to do, sweet love and the future. that’s really all there is. to write and say, Love, Public Enemy, in My Winnipeg. Garrick Theatre. and the beautiful 600. 96 degrees inside! May 21.

One response to “Public Enemy at the Garrick Theatre, Winnipeg”