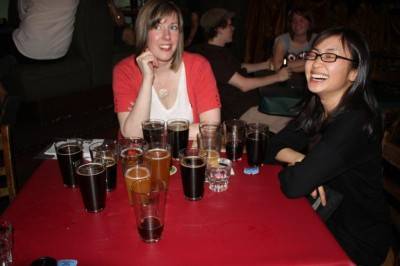 Karen and Jennifer at Good and Evil, part of Vancouver Craft Beer Week, May 13 2010.

It’s the first of what will hopefully be an annual tradition. The first Vancouver Craft Beer Week has been pouring the good stuff in various Lower Mainland locales, offering thirsty citizens the chance to sample some of the finest in local sudscraft.

Good and Evil at Waazubee (1622 Commercial Drive) was one of four sold-out events last night alone. For their 30 bucks, ticketholders, maybe 20 or 30, were handed six beer tickets and a card good for “a plate of food” (basically bar snacks from the Waazubee menu) and corralled into the raised back area, the catbird seat overlooking the rest of the restaurant. Five breweries, including Lighthouse (Victoria), Howe Sound (Squamish), Cottage (Pemberton), Russell (Vancouver) and Tree Brewing (Kelowna) were pouring the light and the dark (hence the name, “Good and Evil”).

We had the good fortune to sit with Karen and Jennifer, two fairly recent converts to the idea that beer can be not only good but delicious. (Karen usually has some Leffe – 6.5 % – in her fridge.) While the Tree Hefeweizen (somewhat cloudy) and the Cottage Blackberry Porter (sweet and heavy) received good marks, the easy favourite at our table was the Tree Captivator, a double bock that, just by coincidence, I’d tried the day before. Not as heavy or malty as the Howe Sound Imperial Stout (a limited release) or another dark, the Russell Angry Scotch, but delicious and full-bodied all the same, the Captivator comes with a bonus alcohol content of 8.2 (if memory serves)(which it often doesn’t).

Except for a lot of beer going to waste, at least at our table – six is a lot of pints, though it does offer a fair sampling of the 10 available – Good and Evil left us with a nice malty taste in our mouths and, thanks to the Captivator, an early evening buzz worthy of a warm Thursday night in the city. 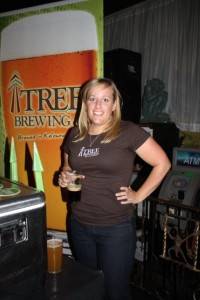