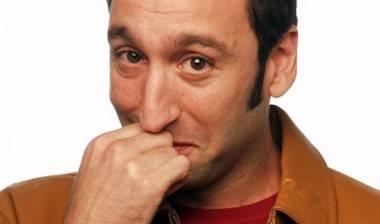 What makes Jeremy Hotz so funny? His trademark mannerism of covering his mouth and face as he smirks at his own jokes?Â  His quick wit when he works the crowd? HisÂ  experience in movies and TV (Just for Laughs) and as a comedy writer (for The Jon Stewart Show)?

Whatever it is, the funny was on full displayÂ at a packed Vogue Theatre Saturday night. After welcomingÂ the audience with “I’m glad we’re finishing this bullshit tour. I’m tired,” Hotz was off, sharing his thoughts on a wide range of topics: marriage (“I was married for well over a year. I gave it the community college try.”), public transit (“Look at people’s faces through the window on a bus. The bus is a shit mode of transportation!”), and, of course, pets (“My dog got a haircut. It’s like he’s a bald dog – now cats try and fuck him!”).

Some of the crowd interaction drew the biggest laughs:Â “You two, lawyers, married? How do you have a truthful conversation?”Â  And in the great comedic traditon, Hotz did have local references: “Maple Ridge? Where the fuck is Maple Ridge? Isn’t that a breakfast sausage?”

What was most impressive was what’s often lost at even the bestÂ standup shows: keeping up the energy and sustaining the laughs with no lulls. People arrived primed to laugh, of course, and Hotz harnessed this energy masterfully. For all of the 80-minute set, it seemed laughs built on laughs.

This was especially true during the inevitable Olympics jokes. After reminiscing about the gold medal hockey game and the 1972 Canada-Russia series, Hotz acknowledged the drive of the women’s hockey team: “Hey! Our bitches came to play!” He also congratulated our gold medal men’s curling leader: “That bastard with the bald friar-thing head – it looks like a curling rock, it’s confusing! Just put a handle on it!”

Although he’s billing his current tour “It’s the Most Miserable Time of Year Tour”,Â Hotz did occasionally take a break from smirking, whining and complaining to provide some tender but blunt words of encouragement: “You’re on your own in this bullshit world.” Maybe so. But for this hilariousÂ evening, it seemedÂ people were anything but alone, and the misery was definitely good company.

One response to “Jeremy Hotz at the Vogue Theatre”