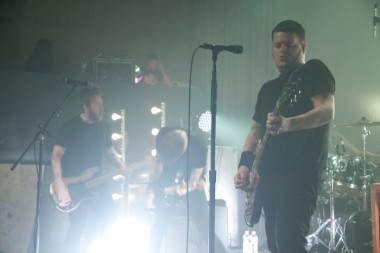 Against Me Tom Gabel interview

Against Me! released its first album, Against Me! Is Reinventing Axl Rose, in 2002. After climbing through the punk rock muck, the Gainesville Florida band grabbed the brass ring with 2007’s New Wave, its major label debut produced by Butch Vig (Nirvana‘s Nevermind). The breakthrough record gave the world such air-punching anthems as the title track, “American Abroad” and the immortal “Thrash Unreal”.

White Crosses, album number five, is scheduled for a June 8 release. We caught up with Against Me! singer/songwriter Tom Gabel at the Rickshaw Theatre after soundcheck on the second (Vancouver) stop of a pre-release tour that would see the band opening for Toronto act Billy Talent across Canada.

Shawn Conner: You guys must know Florida pretty well. Is that a state where you’ve played every shithole, dive, seedy bar?

Tom Gabel: I feel like I know every back road there, by heart. Yeah.

SC: Have you had a chance to check out this neighbourhood?

TG: I walked around a little. What’s the name of the one street?

TG: I was amazed at how many black eyes there were. It looks like a fuckin’ rough neighbourhood.

SC: So White Crosses is the new album, with producer Butch Vig, whom you worked with on New Wave. I read one quote where you said “The Ocean” [from New Wave] might foretell things to come on the next [this] record. Does it?

TG: I think “The Ocean” might be a direct foreshadowing of the song “Suffocation” on the record. You can see hints in that direction. But I don’t. In a lot of ways, approaching this record I wanted to forget everything and have a fresh start.

I moved away from Gainesville right at the start of the writing process to about 75 miles away to St. Augustine, which is a small coastal town. I spent a lot of time riding my bike around and looking at trees and shit like that.

SC: You have a kid… this is the first time recording/writing/touring while being a dad.

TG: Well actually she was born on October 30, right when we finished tracking.

SC: Still the impending, “my life is going to change in a major way…”

TG: I felt like I was losing my mind at some points. We didn’t know if the baby was going to come first and we were going to be finished tracking the record, and I ended up moving to Los Angeles because we were having the baby and ended up renting a place out there.

SC: And you’re not touring with your wife and child, obviously…

TG: She’s going to come out and visit at some point. My wife is Canadian. She’s from Windsor, but her parents live in this area.

SC: Is this going to be your most extensive Canadian tour?

TG: We’ve done a good amount of touring in Canada, some pretty out of the way places. I love touring up here. The border is just such a hassle. We all slept through it today though.

SC: Okay, what’s going on between you and Alternative Press editor Jason Pettigrew? I was following your Twitter feed and saw this Tweet-war going on.

TG: [laughs, somewhat embarrassed] I just fired off a remark after he said something derogatory about my band. In hindsight probably not the smartest thing to do.

Tweeting is really fucking childish and that whole world is stupid so apologies on my behalf for firing that off. At the same time I fucking loathe AP magazine. I don’t think there are many things detrimental to the scene, but I think AP definitely cheapens it. It’s like Tiger Beat or something like that.

SC: Yeah, that’s not the first time AP‘s come up… there was that interview you did for Blender with Chris Hannah from Propagandhi where he says he’d just as soon shoot himself in the face with a bazooka as read an issue. Anyway, I took some questions that you asked Chris and thought I’d ask them of you. Like, which album of yours does Fat Mike [NOFX bassist and president of Against Me!’s former label Fat Wreck Records] like the least?

TG: I think in fact Searching for a Former Clarity. Unless he’s changed his mind over the years. He didn’t like the sequencing, and I don’t think he liked the cover. I think he wanted our name to be bigger on the cover.

SC: Would you rather live without sarcasm or metal?

SC: On what format do you prefer to listen to music, and why?

TG: Well I collect vinyl. I enjoy just the act of collecting. I do think the sound quality is better on vinyl. I don’t mind CDs, but collecting them drives me nuts. MP3s I think are just whatever, disposable.