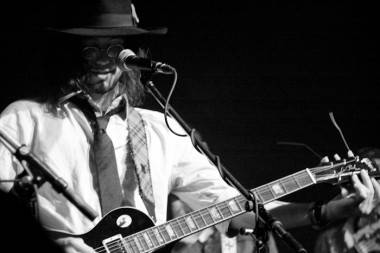 Standing in the estrogen-heavy crowd at the Venue on Sunday night waiting for jam-funk-alterna-blues band 100 Monkeys to start their set, I found myself studying the crowd and pondering the band before they even hit the stage. The reason – one of the members, Jackson Rathbone, leads a double life as an actor, notable for his involvement in a small film franchise called Twilight. Truthfully, had it not been for this connection, I probably wouldn’t have cared to cover the band.

It would be easy to delve into the cynically-tempered pool of those past performers whose crossover pursuits have required them to hyphenate into their professional descriptions, with results ranging from iconic (Frank Sinatra, William Shatner) to indisputably popular (Jennifer Lopez) to ill-conceived (Scott Baio).

There are fewer examples of those actually succeeding (Mos Def, Juliette Lewis) than crashing and burning (Mariah Carey – it remains to be seen whether her well-received supporting role in Precious erases the memory of GlitterÂ from the collective conscious). The mechanism of our celebrity-saturated culture seems fuelled upon a public response that is mired in a cruel cynicism cloaked in sick schadenfreude – we delight when famous people trip over their own egos into a hellfire of failure.

Writing off 100 Monkeys as a vanity band, the fanciful side-project of some young rising star seems all too easy. Going down the yellow-brick road of predictability seems almost hateful, especially after surveying the crowd of (overwhelmingly) young women whose poppy-field level of intoxication erupts into a shrill chorus of “WOOO” when Rathbone emerges briefly, pre-show, to do some stage set up. I have never seen so many camera phones directed at one person, ever. It was an odd sight to behold.

Introducing the band and pumping the crowd is a guy in a banana suit, who I later come to learn is their manager (bananager?). At this point it becomes very clear that these girls are loud – 100 Monkeys fans are screamers. Somewhere from the craziness at the front of the stage, Snipe photographer Jessica BardoshÂ texts me – “These girls are vicious!” I am afraid for her.

As they emerge from beneath a screen of LED lights, a colourfully pixilated backdrop reminiscent of a giant Lite Brite, the band members wear pimp-like overcoats which they immediately remove, prompting howls of “Take it all off!” Male objectification, while I suppose refreshing, has an air of (processed) cheese about it, which I liken to being at a stagette party when the Chippendales dancers are about to perform. In the interest of unbiased reporting I force myself to remember how much I loved Jason Schwartzman after seeing Rushmore for the third time and pretend I’m at a Phantom Planet concert.

The Monkeys open with two songs from their new album, Grape – the bluesy “Wings on Fire” followed by “Orson Brawl”. The faster, driving rhythms of the latter make me think “electro-pop” if not for the percussion; it’s a nice touch that at times seems too loud or imbalanced. In between songs the Monkeys switch instruments and move around, act silly onstage, tell some jokes which I miss the punch lines for and the crowd goes, “WOOO!” I get the feeling the guys could do anything to provoke a resounding chorus of “WOOO!”, though in all fairness the crowd does seem to be singing along and getting into the music.

What struck me most about the show was that the Monkeys have an unusually broad sound, mostly having to do with the fact that all the members seem to constantly be moving around and switching instruments. As a talentless Monkey myself, I admire their bravado. Everyone in this band wants a chance to be a Rock Star, and Rathbone is cool to share the stage with his band mates. They exude an innocent joy as they perform sans egoism, the interplay between them and their audience a constant exchange throughout the course of the evening.

Though there is an underlying bluesy quotient to their music it seems inconsistent and frustratingly in cohesive, so rather than seeing one band it feels like I’m seeing several. The guys are clearly talented and have a shared prowess (Rathbone and J-Rad have some serious guitar skills) but I can’t help think that their broadness is a liability, and what they really need is to collaborate with a producer to not just refine but really define their sound.

Rathbone, with his wavy, shoulder-length ebony hair, pale skin, and felt hat evokes Jack White. and I wonder about the influence there. Jack White has a veritable menagerie of musical sensibility that is quietly yet firmly grounded in the blues, and despite of (or because of) that a White Stripes record always sounds distinctly like a White StripesÂ record. This is, by no means, a bad thing.

“The Monkey Song” regains my attention, but mostly because Monkey Ben-J emerges from behind the drum kit. The song itself is slower, smoother and more bass-heavy than on the album and I’m getting distinct Rock Star Boyfriend vibes, which is truly remarkable considering that I’m the only one here who hasn’t had any all evening.

He has a deep voice and artful facial hair. Suddenly, I’m on Team Ben-J. He’s really the hot one, but these blind sirens are too young to know better (oh, youth). The estro-fest is affecting me, and I wonder about the possibility of experiencing collective, spontaneous ovulation.

Towards the end of the show, Monkey Ben-G is back on keyboards and sings an exaggerated, slightly awkward, gravelly-voiced bluesy number that reminds me of Beverley D’Angelo’s striptease rendition of “Big Spender” (“ba-ba-ba-boo”) from National Lampoon’s European Vacation. Some songs are better left to those whose voices have been ravaged by time and years of cigarette smoke.

Overall, the show was enjoyable but unremarkable, sonically interesting when the musical rambling was kept to a minimum. Â Though the inherent and expected Twilight fandom quotient was undeniable, it was also not the sole thrust behind the exuberance of the crowd. Rathbone and his band are fortunate to be able to ride the wave of the pop-culture phenomenon, but they are talented enough not to have to rely on it.Â  To avoid getting lost in the jungle of musical crossover has-beens, 100 Monkeys will have to build a fan-base motivated more by a signature sound and less by the fleeting fantasies of vampire crush lust.