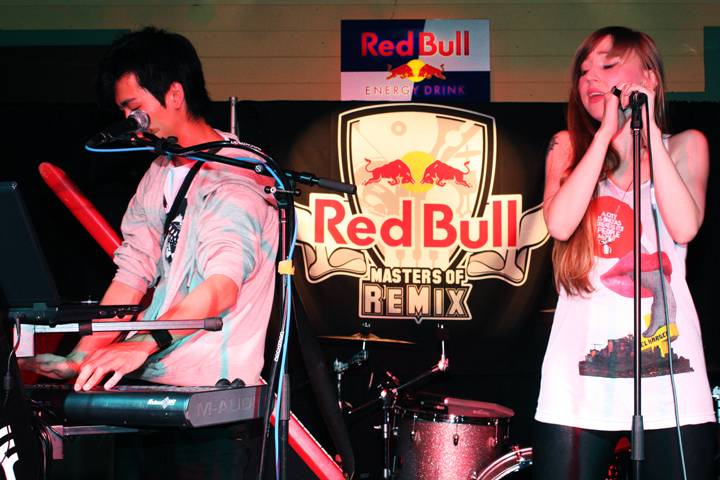 Review and photos – KeysNKrates and Love and Electrik at the O.C., Winnipeg, Oct 1 2009

Let me preface this review by stating that I am not a fan of the suburbs. At all. I’m one of those folks who works and lives and spends his time in a city’s core. So when I found out that Love & Electrik, the Eh! Team and KeysNKrates were playing a suburban college bar, the O.C., in the south end of Winnipeg near the University of Manitoba, I was, well skeptical is a kind word to use.

It seems that the marketing team at Red Bull put together this thing called the Campus Invasion Tour, gathering together some very talented folks to play shows for suburban college kids. I really like the idea of trying to bring some of this music into the college scene – after all, who has more disposable income for albums, T-shirts, booze (and of course Red Bull) than this demographic. It’s clever marketing. But not that clever.

We arrived to find a giant Red Bull SUV parked outside the bar; an SUV tricked out with large screen flat panel televisions playing Red Bull promo videos. It even had a set of turntables and CDJs attached on a rig to the back panel of the truck. Truthfully, it seems a little overdone to me.

Inside the club, DJ Illo (one of the Eh! Team Djs) was mashing up everything from Queen to MJ to Harold Faltermyer’s “Axel F”. Even with such great tunes spinning, the crowd seemed more interested in drinks than beats.

Then Love & Electrik hit the stage. I like this Vancouver duo muchly; Roxy Aiston (vocals) and Kevin Mah (keyboards, vocals) are part a movement that’s bringing back that electro/’80s synth sound. And they did a great job with their short (30 minutes or so) set, which included the first Love & Electrik single “Sex Video” and their voicebox’d cover of Phil Collins‘ “In the Air Tonight”.

But the crowd just wasn’t feeling it. The dance floor was lightly occupied with folks who had obviously made the trek from the core of the city to see them, plus a few drunken college girls looking to dance. But, ironically considering the sponsor, the energy just wasn’t there – most likely, I expect, because of the disconnect between the genre of music and the bar’s regular patrons.

Indeed, when Aiston and Mah were done, the bar’s house DJ put on some Top 40 dance trash, and suddenly the dance floor was full of bodies. Enter DJ Pump (another of the Eh! Team) delivering more mashups, and the dance floor emptied. At this point it just felt like another night at another college bar, but with more Red Bull logos. That is, until KeysNKrates appeared.

I saw this Toronto drums/keys/tables trio for the first time just this past summer at the Winnipeg Jazz Festival. They blew me away then, and they did it again last night. It seems that, no matter what the mood of the room, they draw people onto the dancefloor as soon as they start playing.

Their Jay-Z mashup “C.E.O.” started the set, and suddenly everyone was rocking. It’s as if Jr Flo, Matisse Francois and Adam Tune play for each other  more than the crowd, hammering through well-composed original mashups and bringing a transformative energy to the place. Original mashups – it sounds like an oxymoron, but it’s true. KeysNKrates have truly reinvented the remix, as their website claims. They make each track their own no matter it’s origins – even Lionel Ritchie‘s “All Night Long” (morphed into “The Longest Night”)!

I give props to any group that can hit the stage and enliven a crowd, and enliven it they did. And one of my measures of a great performance is how long it sticks with me. Even as I write this, I’ve got “C.E.O” embedded in my brain.

I can’t say I would ever revisit this venue, and I do believe that this lineup would have been better suited to a downtown spot with a more appreciative crowd. But it turned out to be a great show after all.

4 responses to “Love and Electrik at the O.C., Winnipeg”