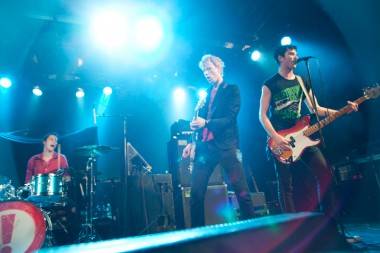 Three brothers from Winnipeg caught up in the big-money music machine. Is such a thing even possible in this day and age? (Note the sarcasm.)

Inward Eye‘s live shows are, from all reports, on fire; capturing that energy on record is a different matter. Throwing Bricks Instead of Kisses, the trio’s 2009 debut, has some rockin’ tunes, to be sure, but is unlikely to turn the heads of fans of the band’s purported influences (the Clash, the Jam, the Who). Who, to be fair, are probably all grizzled older rock types (like yours truly) who don’t go to rock shows anymore anyway (unlike yours truly).

Put it down to growing pains; as singer/bassist Dave Erickson says in the following interview, “We were dumb fucking kids” when he, Kyle (guitar) and Anders (on drums) made Throwing Bricks. Today, the group is older, hopefully wiser, and certainly more experienced, having opened up for heroes the Who for several shows and honed its live set to the point where reviewers are falling all over themselves in rock ‘n’ roll ecstasy.

We caught up with Erickson, who is currently on tour with Inward Eye opening for Flogging Molly on a cross-Canada tour, in Toronto, aka the centre of Canada’s music scene… 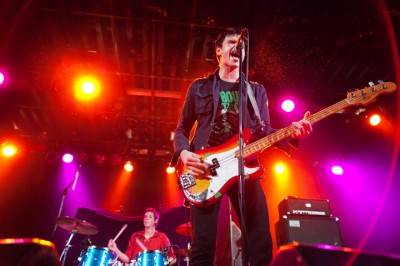 SC: Did it have a practice space?

DE: Kind of, but the ceilings were too low so you couldn’t stand.

SC: What, are you guys giants or something?

SC: Really? Jesus. Your parents, too?

DE: Yeah, we just pulled into our tour manager’s place, he hasn’t been home for about two months so he’s picking up some clothes. 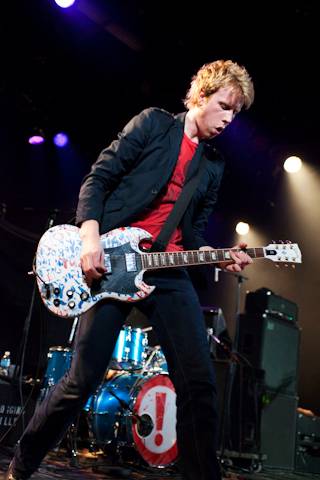 SC: How long have you been on this Flogging Molly tour?

DE: We started in Halifax on the 14th, so a couple of weeks.

SC: Are you starting to smell?

SC: How’s opening for Flogging Molly? Is it a good fit?

DE: It’s awesome. Even though it’s more of a Celtic flavour, they have a really punk-rock attitude. And the fans have really been liking us.

SC: How many shows did you do with the Who?

DE: Twelve in the States. It was an incredible experience, the most amazing fulfilling surreal thing we’ve ever done. I remember walking out onstage for the first show and thinking, “How the fuck did I end up here?”

DE: Yeah, Roger Daltrey has his feet planted very firmly on the ground, he’s just a regular guy and he’s really easy to talk to. Pete Townshend has an edge to him, you can’t tell if you’re pissing him off when you’re talking to him. The first night he just walked into our dressing room, didn’t say hi, just looked around and finally said, “You look the part.”

SC: I think I read where, during the recording of Throwing Bricks, the record company [Sony] wanted you to change some of the lyrics?

DE: Yeah, there was some standard record company bullshit. I understand why, some of the lyrics were kind of light, so it was back to the drawing board. I think it helped. We actually recorded that record three four years ago, and no one was really jazzed about it. There wasn’t a lot of backing behind it until we kind of decided let’s try another couple of songs, that’s how we ended up working with Howard Benson.

SC: I’m sure it was a steep learning curve.

DE: Shit yeah it was man. We were kids, dumb fucking kids. We’ve lived a lot of life in the last four years, and I think we know what we have to say about the world now. For the next record we’re going to put a our foot down and be more honest to the three-piece dynamic. We never did any of that on the record, we decided to make a full-on studio production, and a part of me can’t wait to make the next record. It’ll have more of a trashy, punk rock old-school sensibility.

SC: But you’re touring a little while before making the next one?

DE: Yeah, after the Flogging Molly tour we’re teaming up with them Nico Vega from L.A. for a month-and-a-half touring of the U.S. We still like a lot of songs on Throwing Bricks, and we want to give them a fair chance.