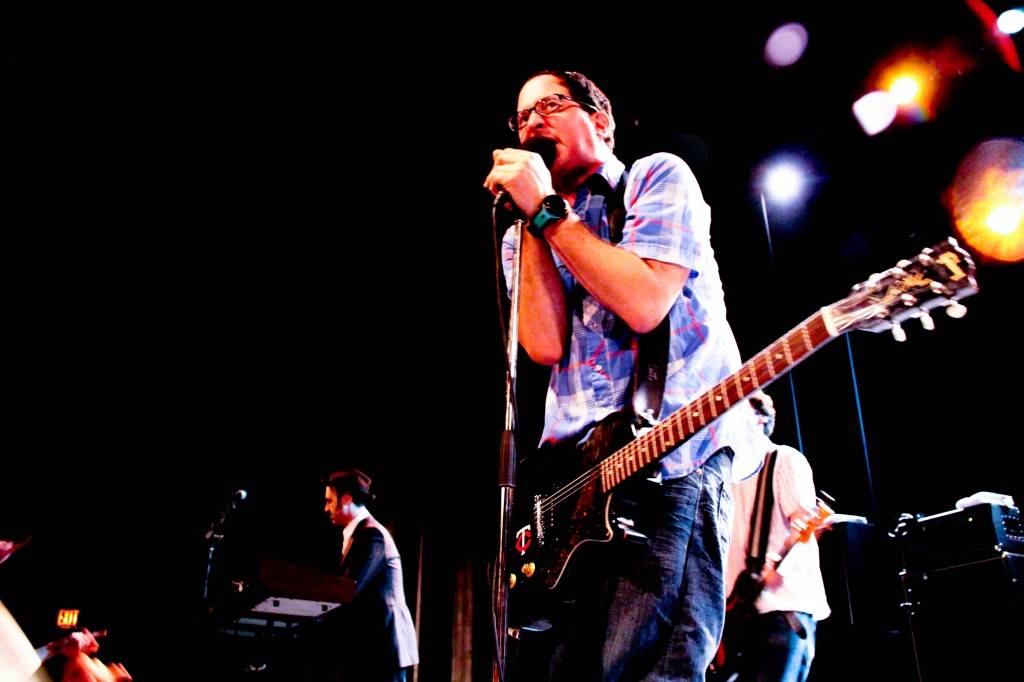 Review and photos – The Hold Steady at the Vogue Theatre, Vancouver, Sept 19 2009

With an onslaught of waving, head-smacking and various other knockabout, slapstick antics, Craig Finn managed to both mock and honour history’s hallowed rock gods he as he shepherded The Hold Steady through a slew of showstoppers at the Vogue last night.

The high-spirited set combined a nice mix of old and new – a decent chunk of material came from The Hold Steady’s latest album, the rowdy, narrative-heavy Stay Positive, and a smattering of older faves like “Party Pit” and “Chips Ahoy!” pleased the diehards.

The band even led the crowd through a handful of new songs like the sure to be classic “Heaven Is Whenever”. The song leads with, “She said ‘Heaven is whenever we can get together, sit down on your floor and listen to your records'” and namedrops Pavement, Husker Du, Heavenly and Utopia to continue The Hold Steady’s time-honoured tradition of exalting the bands that came before them.

There’s no doubt that bootlegs of these new songs will be online in the next few days. The Hold Steady has a rabid fan base that the band attributes their success to with a couple lines from the title track of Stay Positive. The first song of The Hold Steady’s very first release was called “Positive Jam”, and so on the similarly-titled Stay Positive, Finn sings:

Cos it’s one thing to start it with a positive jam
and it’s another thing to see it on through.
We couldn’t’ve even done this, if it wasn’t for you.

Earlier Finn had turned to the crowd and asked, “Do you want me to tell it like boy meets girl and the rest is history? Or do you want it like a murder mystery?” Fans instantly recognized Finn’s setup as lyrics from “Chalemagne In Sweatpants” and cheered when he concluded with, “I think I’m gonna tell it like a comeback story” then launched into the band’s best small-town drug-runner song.

“Tramps like us, and we like tramps,” another line from “Charlemagne In Sweatpants”, has become a funny foreshadowing of sorts. The Hold Steady is often compared to a Born To Run-era Springsteen, so the recycled “tramps like us” line is no surprise – what’s actually remarkable is hearing that the Boss is a fan. Apparently Springsteen got a hold of a copy of their third album, Boys And Girls In America and dropped the band an email to say he liked “Stuck Between Stations” and “First Night”.

The Boss would’ve been proud of the sweaty, five-song encore the band ended the night with – The Hold Steady chugged through “Citrus”, dusted off “212 Margarita”, sweated the Springsteen-approved “Stuck Between Stations”, led the crowd in a singalong to “Girls Like Status” and finally ended the whole riotous affair with the aptly titled “Killer Parties”.

The Hold Steady got its start as a bar band and has kept its roots in the whiskey-soaked alleys of rock ‘n’ roll lore. At the end of the show Craig Finn thanked the audience once again: “Our aspirations were pretty small,” he said between grins, “But we’ve been around the world with this shit, and it feels pretty good.”

3 responses to “The Hold Steady at the Vogue Theatre”