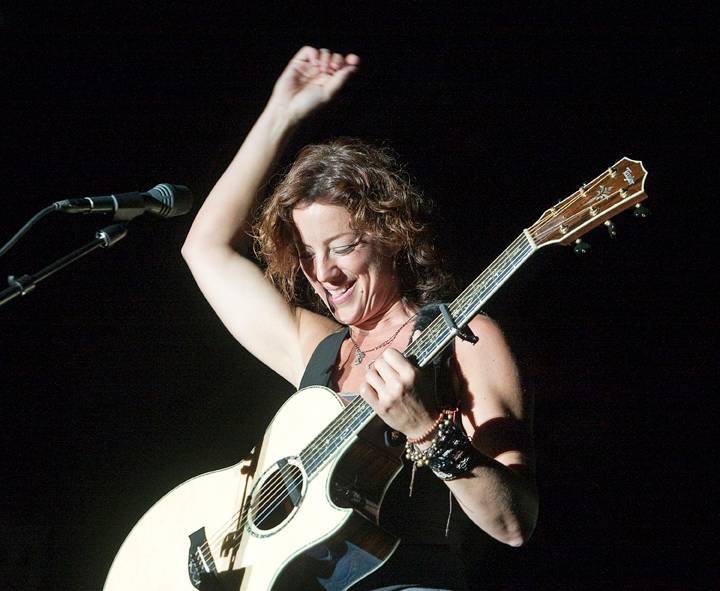 Sitting three rows from the stage with a bunch of rich white people in Ambleside, I was reminded of John Lennon telling people to rattle their jewelry at the Royal Variety Performance in 1963. Such were the curious circumstances of the Summer Sessions at Ambleside, a benefit concert for the Sarah McLachlan Foundation plunked beside Burrard Inlet in one of the wealthiest neighbourhoods in the world, with the Lions Gate bridge as decoration and luxury cruise ships gliding past.

I can’t say I’ve ever seen so many impressive if inappropriate designer gowns at a concert, or the last time I had to listen to a neighboring GQ model promise to send his buddy “a prospectus on Monday”. And when a well-dressed gentleman with silver hair casts suspicious glances in my direction, not once, not twice, but for the whole fucking time I’m there, it’s generally because I’m holding a sign that says Smash the State. Not because I’m at a Sarah McLachlan concert. I even caught the slick motherfucker taking my picture at one point.

But this is where I found myself on a scorching hot Saturday with the single-minded goal of seeing Neil Young. Who opened for Sarah McLachlan. Which one might say is a little fucking topsy-turvy. But we’ll let it slide, since this was Sarah’s day, and she should be allowed to do whatever the fuck she wants, I suppose. The venue was only “ten blocks from her house,” we learned, and beyond my admitted negative bias, the gauzy Canadian songbird delivered a powerful and wholly impressive performance at the end of the night.

I think McLachlan’s music is often very lovely, and just as often shallow and a little cheap, but you can’t argue with The Voice. Especially since The Voice was very nearly felled by laryngitis in the week leading up to this. Indeed, when she spoke (which she did, a lot, about her “feelings”), McLachlan sounded croaky. When she sat down at the piano for “Possession” at the top of her set, she sounded miraculous.

Sheryl Crow’s band then joined McLachlan, backing vocalist Melissa McClelland and longtime sideman Luke Doucet for some old hits (“Adia”, “I Will Remember You”) and some newer numbers (“U Want Me 2”), while Crow herself duetted with McLachlan on the evening’s emotional climax, “Angel”.

The Sarah McLachlan Foundation funds music outreach programs for kids, 25 of whom made a pretty charming appearance earlier in the day bashing out Metric’s “Combat Baby” among other things. Before that, a wicked 45-minutes of country-noir, smoky jazzabilly and other delights from McClelland and Doucet musically outreached to me a little more directly, while Sheryl Crow’s glammy run through a bunch of her hits (you know what they are) got Judge Smails and all the others crackers dancing.

Shakey spent his hour as McLachlan’s warm-up act on an all-acoustic stroll through – nerds take note – “Goin’ Back”, “Powderfinger”, “Pocahontas”, “Birds”, “Sail Away”, “Old King”, “Long May You Run”, “Light a Candle”, “Human Highway”, and “Hold Back the Tears”, with Ben Keith joining him on dobro at the halfway point, along with Pegi on backing vocals and awesome hippy mom dancing.

Young’s entrance seemed almost accidental, and he didn’t say too much. Shortly before he ambled onstage with a slightly confused look, an enormous meteor streaked across the mauve sky trailing white-hot debris. It was completely fucking incredible, and I noticed that maybe every 1 in 50 people as far as my eyes could see was pointing up or scratching their heads. That’s probably about the same ratio of persons I might have related to at this thing.