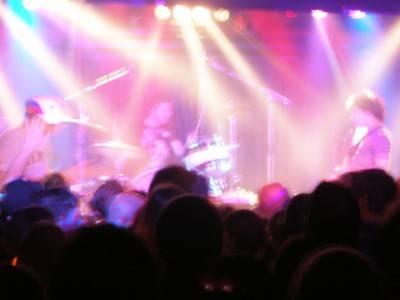 Moved from the prestigious Commodore Ballroom to the smaller, slummier Red Room on short notice, Vancouver-born Kid Koala, Dynamite D, and the ex-rhythm section of Wolfmother played their first show as The Slew on their 10-date tour.

When I first heard about The Slew, I was rather intrigued – two DJs, a live bassist and drummer, plus six turntables and a keyboard? I hadn’t heard of anything like that before. Kid Koala, aka Eric San, released a zip file of The Slew’s debut album for free on his Myspace page, and the album was exclusively on sale for this once-in-a-lifetime tour – it’s not available in stores or online.

I remember one of my friends was obsessed with Wolfmother about a year before they got big, and I also remember detesting their music and saying, “This will never catch on.” I was wrong, obviously, as a year later their hit single “Woman” was topping the charts everywhere and even got a spot on Guitar Hero. Thankfully, I did not hear or see any sort of Wolfmother-ness in The Slew’s performance – bassist Chris Ross and drummer Myles Haskett could have easily been a couple of random Australian guys just rocking out and having a good time. Of course, since they’re used to playing with one another, they had awesome chemistry, and the bass work was probably some of the best I’d seen in a long time – plus, he played a Rickenbacker, which are quite possibly the coolest basses in the world.

According to Kid Koala, who would briefly speak into a mic in between songs, The Slew was a project that was “four and a half years in the making,” which is rather impressive since most bands are gathered together in less than a year’s time.

The extremely tight rhythm section was then matched with the two DJs, who kept pulling out their vinyls and scratching the hell out of them. Don’t get me wrong – scratches are sweet, but sometimes they would seem a bit out of place (and weren’t even on time in some circumstances). Of course, I have to give mad props to both the DJs, because it takes some serious skills to actually scratch – I mean, I’m sure if I tried it I would instantly fail.

Though initially disappointed that The Slew gig had been moved from the more familiar (at least to me) Commodore, the Red Room surprised me. I probably wouldn’t make myself a regular there, but the sound was topnotch, and the lighting was frequent and exciting and full of disco beams and laser lights. The stage was on the small side, yet wide open enough to see the foursome perform, and you could tell that the band was stoked to be up there as their poured themselves into their music, playing each track in order from the album.

It’s hard to describe the exact genre of what The Slew was playing that night. Think sampled guitar riffs, old skool vocals, grooving bass lines, hard beats, and some serious scratchin’ all thrown into one pot. How do you even begin to put that into a genre? I keep trying to figure it out, and I can’t – which is a good sign The Slew is on to something.