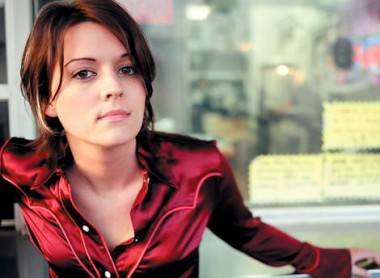 A couple of years back when she was touring in support of her breakthrough second album The Story, I asked Brandi Carlile about Elton John, whom she’d named as one of her heroes. “Is there a period of Elton’s you’re less fond of, say the ‘I’m Still Standing’, ’80s Elton?” “Nope,” she said, not missing a beat. “I love it all.”

So you can imagine the young singer’s excitement when the phone rang one morning last year and it was Sir Elton himself. The 28-year-old Ravensdale, WA resident had been trying to get word to the pop superstar about singing on her next album, and, well, Elton responded. And so he plays and sings on “Caroline”, a song Brandi Carlile wrote for and to her niece, and which is on her new album Give Up the Ghost.

The tune is a bouncy little blast of sunshine, but then Carlile does upbeat pretty well; “Touching the Ground” is another toe-tapper. She also does drama, as evinced by The Story–three songs ended up on Grey’s Anatomy. And, on Give Up the Ghost, she brings her big powerful voice to bear on the swelling piano ballad “Before It Breaks” (with a chorus goes, “Let it bend/Before it breaks”) and “Looking Out”, which has a slick radio chorus and is, feel-wise, a second cousin to Jewel‘s “Standing Still” (a song I still love). And the sparser “I Will” and “Oh Dear” are examples of the smalltown Washington State singer’s more laidback, country music roots.

Carlile called us, via her record company from Toronto. In the midst of a tour that ends in Seattle Oct. 24, she had played that city’s Mod Club the night before. We asked Brandi what she was doing when Elton called and found out who in her band – guitarist Tim or bassist Phil Hanseroth (aka “the twins”) or cellist Josh Neumann–is most likely to quote Close Encounters of the Third Kind. I began by reminding her of her Elton John quote. “Elton John can do no wrong,” she reaffirmed. 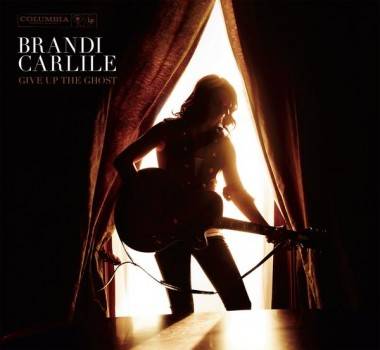 Shawn Conner: So it must have been quite the thrill getting that phone call. Did you know he’d be calling?

Brandi Carlile: Not at all. I just knew he was an amazing person. I thought he might get back to me. He got to me before I was even awake.

SC: Did you talk for a long time?

BC: Just a few minutes.

SC: And he came to you or you went to him?

BC: We recorded his vocals in Vegas, at the Palm Studio.

SC: Did you feel like Kiki Dee (the co-vocalist on John’s hit “Don’t Go Breaking My Heart”)?

BC: Not Kiki Dee at all! He came in and did his piano and vocals in one take. He finished and stuck around and we talked about new music.

SC: That’s right, and didn’t he send you something like 100 CDs afterward? How did that work, one big box or–?

BC: There was one big shipment and they started trickling in as he thought of more stuff.

SC: Was there one artist whose work he included more than others?

BC: Leon Russell. He was appalled I wasn’t familiar with Leon Russell, and now I can see the influence he had on Elton John.

SC: Is there anything you’ve thought of that you think Elton John should hear?

BC: Yeah, I’ve been putting together a collection. But I’m having trouble. He goes to a record shop in Atlanta once a week and buys everything, he really keeps up. I have to really find some obscurities to find something he hasn’t heard.

SC: So let’s talk a little about Give Up the Ghost. You’ve said that a lot of the songs originated in dreams. Are you big into dream interpretation?

BC: You know, I am getting into it. The twins are really into it. I also like Native dream interpretation, and dream recall development. It’s a fun place to write from. I find your subconscious is much more honest with you than your environment.

SC: Do you meditate?

BC: I don’t think I have the attention span. My mind wanders. I know your mind’s supposed to wander, and then you’re supposed to constantly try to bring it back. But I tried it again last night and failed miserably. I just thought, What am I doing?

SC: Yeah, you could be writing a song. Or reading Billboard!

BC: [laughs] Billboard. And I’m on the road all the time.

SC: You recorded Give Up the Ghost in Los Angeles, and apparently you tried sushi and yoga for the first time.

BC: Yeah. I mean, I’ve been exposed many times to both of those things, but I tried them finally when I was doing some soul-searching in Los Angeles. Which is a horrible place to be soul-searching.

SC: Have you heard if any of the songs are going to wind up Grey’s Anatomy?

BC: I’m not sure yet, the record comes out next week.

SC: Would you want any of your songs to appear on one of those vampire shows?

BC: Haha. You know probably not. Unless it was the Twilight series. I’m a fan. I love the first one, and I love the books. I read the entire series in four days. While I was on a road. There goes the idea of being on the road being such a busy time.

BC: Some Cormac McCarthy, and some civil war nonfiction. And I just finishedÂ Communion, about alien abduction.

SC: That’s an odd choice. That came out years ago, didn’t it?

BC: Phil [Hanseroth] lent it to me. He’s obsessed with aliens right now. He completely believes it’s true. He could be right, who knows?

SC: Before the interview I did a search of your name in Twitter, and came across someone who wrote that she knew you when you sang in a choir with your sister.

BC: Huh. That never happened.

SC: Really? Hmm. She also said you were a really nice person.

BC: She made that up too.