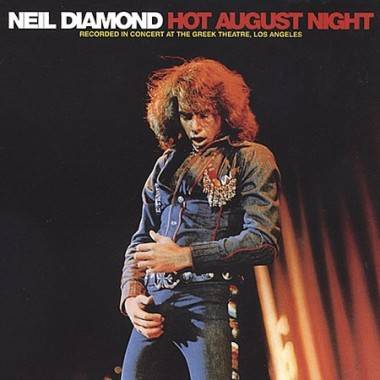 Two facts of life if you happened to grow up in the ’70s: 1) everybody’s dad looked like Burt Reynolds, and 2) everybody’s dad had a copy of Neil Diamond’s Hot August Night. Hence the nostalgic disposition towards the Jewish Elvis amongst those of us who remember, notwithstanding the authentic brilliance of so much of his music.

That’s an irony-free statement, by the way. I’m genuinely inclined to defend Diamond’s gifts as a songwriter and performer, with the caveat that his twin poles of schmaltz and pretension can be a little hard to stomach if you haven’t spent your life wrestling with the man’s perplexing appeal. Besides which, and by any measure, a song like “Love on the Rocks” is superb schmaltz, while the cocaine-inspired new age doggerel of “Be” is equally marvelous as radio-friendly pretension. In both cases, part of the thrill is in deriving pleasure from something so-wrong-it’s-right.

And between the poles you have Diamond’s outrageously great pop, delivered in a singular style by a completely unique artist, and about which one should never feel perplexed, and absolutely not guilty (I actually have more Neil Diamond albums on vinyl than I do Dylan). I would point to “Solitary Man” as a supreme masterpiece of popcraft, on a par with Jimmy Webb or Elton at his mid-’70s best. And then I would point to about another 50 or so classics that Diamond wrote and performed over the years.

But in 2009, one admittedly needs to approach the man with a good pair of nipple-waders. Which brings us to Hot August Night NYC, the third release from Mr. Diamond to use the title. In 1972, the live double album Hot August Night cemented his megastardom, ending the period when he still stood a small chance of winning critical approval. As a kid, the cover fascinated me, suggesting Mr. Diamond as some sort of dual-denim hippie God caught in the very act of Creation itself. All that was missing was a tiny, spinning ball of protoplasm suspended between those oddly posed hands of his.

By 1987, when he released Hot August Night II, things were a little less impressive. Which is fine. Nobody around here is going to pretend that Diamond was a vital musical force after The Jazz Singer, which already sits at the bum end of his canon. And despite the fine collaborations with Rick Rubin in the last few years, Diamond is simply far too entrenched in his own outer-limit Diamondness to make restoration possible. I used to dream of a Neil Diamond club tour that would take him to Commodore-sized rooms, marketed to guys like me who wondered what it would be like to experience the Neil of Gold – his ACTUAL best live album, from 1970 – when his kick-ass band still had dirty noses and nobody was working a stiffened comb-over.

Then I realized it was absurd, and that you go to war with the Neil Diamond you have. Which isn’t a bad thing on Hot August Night NYC. Recorded at Madison Square Garden last year, it’s Grandpa Neil in walking, if not fighting form, gently putting his band through its paces on most of the songs you want to hear plus some pretty credible new ones like the C&W-lite “Don’t Go There” (but no “Be”, sadly, which Diamond was still doing up until his GM Place show of 1999. If it’s not obvious, I really like “Be”). 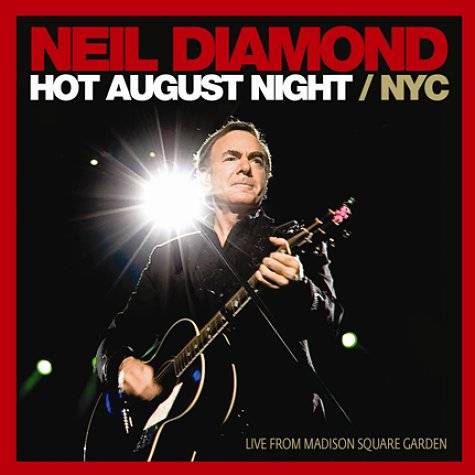 “Gone Too Soon” from his magnificent Tap Root Manuscript album makes an unlikely but welcome appearance, and a portentous “I Am… I Said” is a monster, with Diamond and band holding off on the fireworks until the last chorus.

Diamond takes his place at a little table decorated with a single rose and a glass of wine for his “You Don’t Bring Me Flowers” duet with long-time backing singer Linda Press, and a shouty double-reprise of “Sweet Caroline” is grating – but that’s as cheesy as it gets, not including the frequent cutaways to the whitest audience on earth. But what are you gonna do?

A charming bonus short follows Neil around his old neighbourhood in Brooklyn, where he visits his childhood home. The man isn’t above making fun of himself, taking a seat on the subway while unimpressed New Yorkers refuse to acknowledge him, or running through some of his song titles to a bunch of black kids who have no idea who the fuck he is. But then, Diamond has always had an underrated sense of humour. He did actually toy with using the stage name “Noah Kaminsky”, after all. And then there’s “Knackelflerg”…