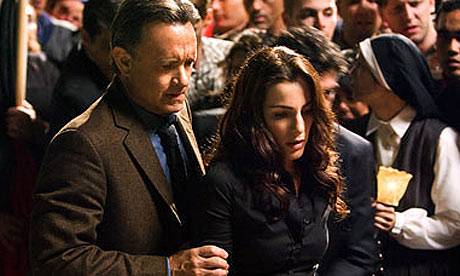 Reprising his role as hairstyle-impaired symbologist Dr. Robert Langdon, but really just adding flesh to all the psycho-political things signified by the words “Tom Hanks”, Tom Hanks is tapped by the Vatican to undergo another intense night of puzzle-solving after the Illuminati kidnaps the four Cardinals of the Preferiti and begins snuffing them out. One every hour, in accordance with some overwrought hooey concerning the four elements (science!), all as a sort of foreplay before the literal Big Bang planned for midnight. Thus begins Langdon’s ripping yawn through the secret catacombs of Rome, aided by a pneumatic particle physicist (Ayelet Zurer), Vatican cops, and the skeptical Commander of the Swiss Guard (Stellan SkarsgÃ¥rd).