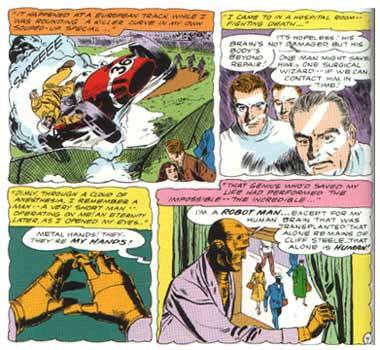 Over at DC Comics in the 1950s, time and space were distorting.Â Batman and Robin could hop in a time machine and visit Jules Verne. When exposed to red kryptonite, Superman would change form for 24 hours, the effects were unpredictable each time: once his head became that of an ant’s, another time he grew a very long beard. A flimsy continuity was maintained through “Imaginary Tales” that were about characters that were already imaginary.

And there was a burst, a burst of parallel earths. This was The Silver Age. In this era, superheroes became more lucid, more feminized; any excess bulk was cartoon-ified. However, as personalities, the DC superheroes were rather cardboard and one-dimensional. WriterÂ Arnold Drake was trying to convince the company to get with it and mix some drama into comics’ sense of wonder! He wanted to reach the younger generation with more realism. He noted what was going on at a rival company.

At first, Marvel Comics was barely a rival to DC. They mostly made monster and humour comics. In 1961, Jack Kirby and Stan Lee came up with a superhero team (perhaps loosely modeled after DC’s non-superhero team, theÂ Challengers Of the Unknown, also created by Kirby in 1957) that added drama and conflict to this soft and flowing age. This team was called TheÂ Fantastic Four and comic books changed! There was still the sense of rollicking fun but these characters were tormented. They gained their powers through cosmic rays. The Thing was orange and lumpy but he didn’t want to be orange and lumpy, he wanted to be human again! He was joined by Mr. Fantastic, The Human Torch, and Invisible Girl. They would bicker and argue and love each other, they were family. Here in The Silver Age was the fresh, bright dawn of The Marvel Age!

Drake paid close attention. He created a super-team with so much pathos that they were fatalistically named The Doom Patrol. You want torment? Each member had their own literal freak-accident back-story of disfigurement: Robotman was Cliff Steele, former stock racer now a human brain housed in a metal body; Negative Man was Larry Trainor, former pilot, now a glowing skeleton completely bandaged with a strange flying being of negative energy that he can let loose for sixty seconds at a time; and Elasti-Girl was Rita Farr, former movie star, now able to shrink and expand at will. They were joined together to protect the world by The Chief, a wheelchair-bound genius (a mere three months before the wheelchair-bound genius Professor X debuted with The X-Men at Marvel). All of these characters were portrayed as so human that they rarely used their superhero names.

Drake needed an artist. In his foreword to Volume One ofÂ The Doom Patrol Archives (DC, 2001), he writes that the artists in editor Murray Boltinoff’s stable “…were all busy. That meant the DP would get some backup artist. So ‘pessimism’ was the password when Murray brought in a very lean, eagle-beaked, lantern-jawed guy with eyeglass lenses even thicker than mine: Bruno Premiani.

But his superb draftmanship, anatomy and design work turned my prejudice to dust. Still, could he give the DP the unique quality it needed- a quality I couldn’t define myself?” “Bruno’s first penciled pages told me we had truly lucked out. What he had recognized was that these super-heroes must be as human as possible. He captured that spirit from page one and sustained it for 42 issues: fabulous powers and fantastic enemies notwithstanding, The Chief, Rita, Larry and Cliff remained real people.” 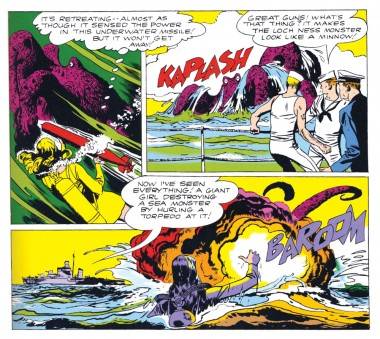 Premiani’s style was in marked contrast to Kirby’s work over at Marvel. Kirby exemplified the lack of confines to his imagination through pure dynamism! Premiani was much more low-key and had a much more European style. This almost certainly relates to his Italian background.

Bruno Premiani started out as a political cartoonist in Italy until Mussolini wanted him dead. He fled Italy to reside in Argentina for several years until Juan Peron caused him too much trouble. After moving to America, Premiani worked on numerous romance and western comic books. Before The Doom Patrol came his way, he was by no means known as a superhero artist. In fact, in 1957, he even did a highly regarded art book on how to properly draw horses! 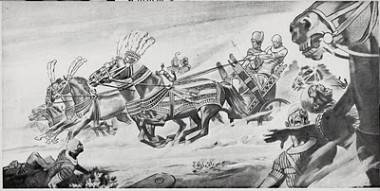 It seems odd to describe the style of the original artist of The Doom Patrol as romantic. But his faces were emotive and he had a gorgeous use of blacks to illustrate shadows and mood. Premiani inked his own pencils. His use of the brush is a very strong component of his art. The artist would simplify rarely, and he had a great attention to detail unlike any other artist working in comics at the time. His art was naturalistic. He could have been at home weaving human dramas yet he did these surreal yarns and you know what? It works!

It is because of Premiani’s just-too-good qualities that the realm of the fantastic seems all the more plausible. The loopiest stuff could happen and it made sense! The Doom Patrol had the oddest heroes but they weren’t stiff (except for Robotman, but he seemed to get contorted and mangled every other issue) and muscle-bound. They all had relatively normal postures and expressive faces. 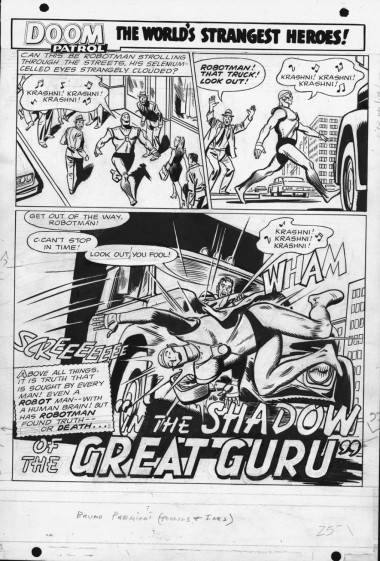 And the villains? The bad guys were right out of an old science-fiction movie! The Brotherhood Of Evil was led by the Brain, a literal brain encased in fluid. He was joined by a genius ape namedÂ Monsieur Mallah and an evil school teacher from Drake’s childhood memories who was given the monikerÂ Madame Rouge. In their first appearance they even used a giant robot.

There was also the prune skinned and frailÂ General Immortus; the obese, green-skinned, kaftan-wearingÂ Garguax; a “Meteor Man” with a flaming head cold; the shape-shiftingÂ Animal-Vegetable-Mineral Man; and the elemental shape-shiftingÂ Mr. 103.

The Doom Patrol was later joined by the animal shape-shifting Beast Boy and Mento, who had a brain accelerating helmet that zapped things. These later characters defined The Doom Patrol as more of a family. Premiani perfectly realized all of these utterly wigged-out concepts and characters! He had the craft to capture numerous transformations, such as the A-V-M Man shifting mid-shape from a dinosaur to a sponge as firemen blasted him with a hose! He did not exaggerate or caricature Monsieur Mallah, the talking ape – he looked like a real ape! Premiani’s style was very refined, he was clumsy only when he was called to be, such as the story when The Doom Patrol’s powers got all switched up! 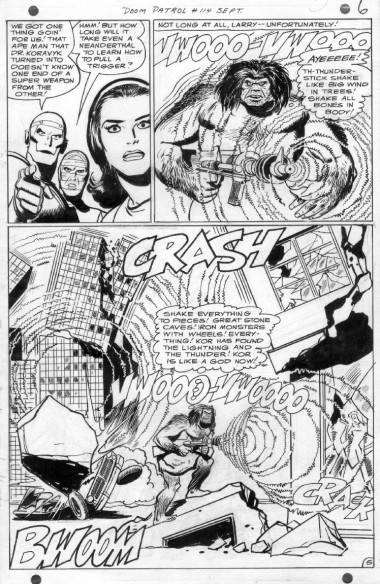 In the action scenes, Premiani’s work was pure flow. Drake never made the action scenes seem trite, anyways, due to the resourcefulness of our heroes working together as a team (much like the team of Drake and Premiani). Premiani’s panels, with their thin outlines, would shift in size and shape where appropriate to incorporate the action. God knows he needed to every time Rita Farr grew to the size of a mountain or shrunk to the size of a mouse! His eye was well trained in regards to depicting fore/mid/backgrounds without too much clutter. He evenly incorporated the silent landscapes and buildings. Even the thin panel outlines made for a sort of intimacy.

After 42 issues together, Drake and Premiani did their final issue of The Doom Patrol. And it wasn’t like any other final issue of the time. In this final issue these heroes, that the readers had come to know and love, died to save a small island of fishermen. Thus ended one of the greatest runs in super-hero comics.

This continuity was maintained in the various later incarnations of The Doom Patrol produced by other creative teams from the late 1970s onwards. Arnold Drake himself endorsedÂ Grant Morrison’s peculiar run from the 1990s as truest to his original vision. Morrison used various experimental literary techniques in writingÂ The Doom Patrol. The Brotherhood Of Evil was even reborn as the Brotherhood Of Dada. It is well worth a read (The Doom Patrol Vol. 2, issues 19-64, also available in six Vertigo trade paperbacks).

John Byrne’s 2004 run is best avoided. Some may describe Byrne as a crackpot hack – he utterly ignored the careful and long-held continuity by pretending that the original team had never died! Luckily, other writers have since rectified this transgression by explaining it away as a sort of parallel earth mishap with some bad cloning thrown in. The Doom Patrol will be returning in a new series written by Keith Giffen and it has also been optioned for a movie.

The original issues of Arnold Drake and Bruno Premiani’sÂ Doom Patrol run (My Greatest Adventure #80-85, renamed Doom Patrol with issue 86, lasting until issue #121) can be rather expensive. As are each of the five Doom Patrol DC Archives editions which reprints their entire run.

Which one is the best? Drake and Premiani were consistent, so they’re all great. Volume One has their origin, Volume Five has their death. However, DC has just releasedÂ Showcase Presents The Doom Patrol Volume One, an inexpensive phone book sized soft cover edition of their first twenty-two adventures on cheap newsprint! The down side is that these reprints are in black-and-white, but this does allow for affordability and to purely see Premiani’s glorious inks stand on their own.

AfterÂ The Doom Patrol ended, Bruno Premiani returned to Argentina to work on comic books there. He was somewhat of a recluse and died in 1984.