Well, the kid liked it.

I was less than enthusiastic about Monsters vs. Aliens as it drew to its apocalyptic close (quasi-spoiler blah blah blah: Stephen Colbert’s “The President” manages to destroy the entire planet in a post-credits punchline to one of the few okay gags in the picture). There’s a big clue right there to the tenor of the latest infant-targeted social engineering campaign to come from the indefatigable Spielberg-DreamWorks mindwar factory – the world is ending kidz, ha ha! NOW EAT YOUR POPCORN!

An extremely contrived and clunky line about climate change from an embarrassed-sounding Will Arnett also falls headlong into the fault line where entertainment and perception management meet. Forelock-tugging references to his evil Master Spielberg predictably come thick and fast, too, lest we or the filmmakers forget who’s in charge of shit around here.

There’s a nod to Close Encounters of the Third Kind at one point (a movie that did more for the Nazi cryptocracy and its bizarre aliens-among-us psyop than any number of silent black triangles over Belgium. Ditto for E.T.). This is followed swiftly by a pointless “Axel F” joke, presumably placed there to remind us that DreamWorks asset Eddie Murphy once mattered to Mom and Dad’s generation. Or maybe the 147 writers of Monsters vs. Aliens genuinely think that the site of the President of the USA busting out some Harold Faltermeyer is just in and of itself funny. Who knows? And as the saying goes – who cares?

Monsters vs. Aliens could be retitled “Them vs. Us”, or “Freedom vs. Islamofascism”, or “Hollywood vs. Me”, but in the spirit of fair play, I’ll put aside the bitching for a moment and talk about the picture itself, which is a 3D animated spectacle along the same disposable lines as DreamWorks’ useless Shrek franchise and all those other ones about penguins or bees or pandas or whatever the fuck animal happens to be facing extinction everywhere but in the precious minds of our little ones (bless them).

In this season’s propaganda effort, earth is threatened by some horrible Otherness from outer space – Rainn Wilson from The Office to be precise, modeled in the spirit of the times and recent UFO reports as a sort of squid-jellyfish type thing. Charged with saving our shit is a bunch of monsters held in military facility so secret that the mere mention of its name will get you a blow dart in the neck (or perhaps a plagiarism suit from the authors of Men in Black).

In charge of the facility is National Security State playboy Kiefer “Torture Good” Sutherland, playing General W.R. Monger in one of the film’s numerous lifts from Dr. Strangelove. Monger has one of the best lines in the film, something (I’m going from memory) about his monster-holding area being so classified that it’s “It’s a mystery wrapped in a riddle inside a paranoid conspiracy”, thereby confirming that DreamWorks reads my email and has no compunction about keeping it from me. I just had to laugh.

The monsters themselves are charmlessly rendered, with the exception of Seth Rogen’s amorphous and literally brainless “B.O.B.”. If Monsters Vs Aliens has achieved anything aside from advancing the dubious cause of western cultural rot, it’s in producing the first likable performance in living memory from Mr. Rogen. Who, lest we forget, is permitted to discuss his love affair with reefer ad nauseum on late-night talk shows, while some half a million or so non-violent drug offenders whither inside America’s prison system.

Rounding out the monster squad is The Missing Link, disconsolately voiced by the usually great Will Arnett (you can actually hear his disappointment with the script), and Hugh Laurie’s Dr. Cockroach Ph.D, which reminds us that “House” was always the less funny and definitely more compliant half of Fry and Laurie.

Reese Witherspoon is Ginormica, aka Susan, who gets hammered by a meteor in the film’s opening scenes and thus grows 50 feet. I was dying to see her cartoon tits for the entire 90 minutes of the film, and for quite a few hours afterwards. I’m not proud of that, but it’s the truth. Ginormica is given deliberate sex appeal to keep hopeless wretches like me on board, while simultaneously suspending us between the real world and fantasyland. Once a disassociative state has been induced, Hollywood is free to insert its horrible messages into our helpless brains (via our cocks). It’s diabolically brilliant. 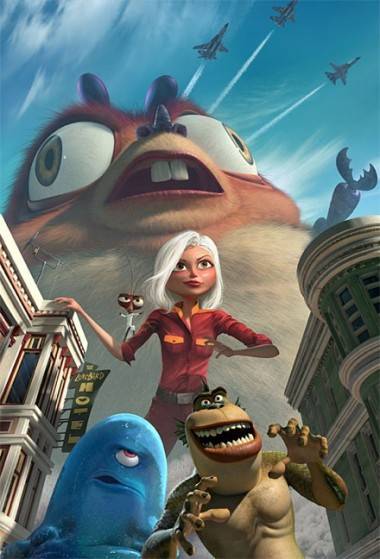 There’s also a mute, humongous, insect-type thing with fur called Insectotron or something – I don’t fucking know – but it’s sort of based on Mothra, which I can dig. Missing Link’s back-story is cribbed from The Horror of Party Beach, and the capture of Ginormica is borrowed from Bert I. Gordon’s The Amazing Colossal Man. Again – I’m with you on all that, Monsters vs. Aliens. You are appealing directly to the Famous Monsters of Filmland nerd inside of me for those few but precious moments.

Sadly, there’s another guy inside me who sees basically all Hollywood product in the context of vast psychological operations and stabilization efforts designed to keep us stupid, poor, and helpless. He’s much louder, angrier, and certainly more aggressive than all those other dudes, and like I said – he didn’t care for it so much.

2 responses to “Monsters Vs Aliens”