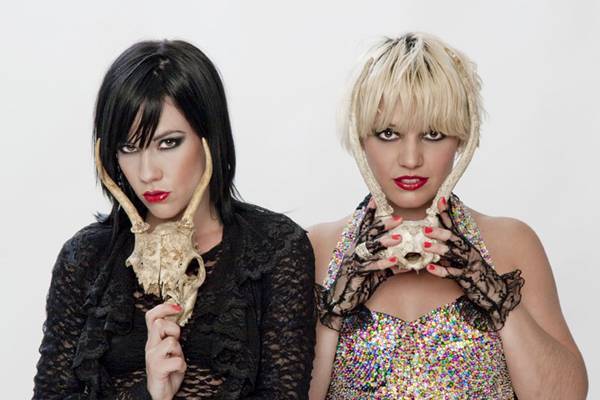 “Fan Death” occurs when an electric fan sucks the oxygen out of a closed room, thereby suffocating everyone inside. The South Korean legend is also the moniker for a much buzzed about “authentic disco” duo that seems to have fashioned its own vortex of hype.

Dandilion Wind Opaine and Marta Jaciubek-McKeever have been playing in various music and art guises over the past few years. Opaine is best known for Dandi Wind, the band-cum-stage spectacle she plays in with Sam Findlay – in 2005, when gigs were scarce in Vancouver, the band took its freak show to an enthusiastic Montreal crowd, where audiences gaped at the group’s carnivalesque theatrics, complete with homemade umbilical cords and swinging Dandilion action.

Marta Jaciubek-McKeever is the other half of Fan Death; she’s also the frontwoman for two bands – the now defunct Girl Nobody and the newly conceived e.s.l., a somber Vancouver band with a Polish cabaret sound.

Fan Death is a different beast entirely. The ladies’ vocals still sound like a mix of Liz Phair venom and Joanna Newsom warble, but the overall look and sound of Fan Death will appeal to the neon-hoodied L.A. crowd more than it will to the riot grrls and freak folks who lapped up their older stuff.

The Fan Death girls have done it up proper: their identities were shrouded in secrecy, their MySpace page featured photos of Dandi and Marta engulfed in flame, and it’s tough to ignore a collaboration with that teddy bear of a world-renowned DJ, Erol Alkan,Â on their first single, “Veronica’s Veil” – which sounds like an Italians Do It BetterÂ 7-inch of Kung Fu Panda ass-pounding the girl from Fiery Furnaces. That’s a good thing, by the way.

The fashion world has always been quick to embrace artists like Fan Death with wide, gold-bangled arms – the German performance artist/stage diva, Nina Hagen comes to mind and the relationship she had with designer Jean-Paul Gautier that helped redefine her look in the late eighties. These days, Chan Marshall, a.k.a. Cat Power,Â is the face of the Chanel Jewelry Collection, a gig she got after catching Karl Lagerfeld’s eye outside a hotel where she was slumped on a pile of Louis Vuitton luggage, smoking a cigarette.

Fan Death has a similar mystique – at least their music does, because they’ve already provided the soundtrack for a handful of catwalk shows during this year’s Paris Fashion Week. Back home, the duo recently played the after-party for Transmission, a four-day West Coast music showcase and symposium.

These ladies have paid their dues and this shit is catchy so I’m rooting for them, especially since Fan Death seems like just another art project incarnation for Dandi and Marta – a little reinvention for two bored art stars looking to glam it up.

One response to “Who is Fan Death?”