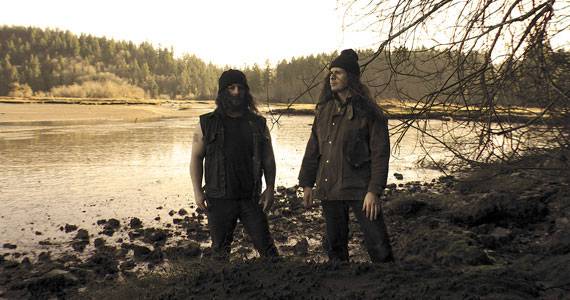 Wolves in the Throne Room.

Sunday night, Wolves in the Throne RoomÂ made theirÂ thirdÂ tour stop in support of their latest album Celestite atÂ downtown Vancouver’sÂ Venue. The show came less than a week afterÂ the release of theÂ record, their fourth. A collection of ambient electronic-drivenÂ noise, withoutÂ any vocal additions, CelestiteÂ is a departure for the OlympiaÂ metal band. However, for this particular occasion the band was less concerned with promoting their latest release than pleasing their fans.Â Brothers Nathan and Aaron Weaver never intended the conceptual album to be performed live, andÂ kept to their black-metal roots for the 90-minute set.

The warm, hazy night extended into theÂ Granville streetÂ venueÂ which was sticky with fog.Â The stage was prepared with an air of ritual and mystery, in darkness except for a fewÂ colouredÂ headlamps. Five black banners,Â each crested with a different forest creature loomed over the stage.Â A groupÂ heavily reliant onÂ atmosphere, the Wolves played on a stage with three kerosene lanterns and, overhead, aÂ criss-crossÂ of orange and blue lighting.

Solid and giant, theÂ three men nonethelessÂ lacked the macho intimidation or bravado that I associate with the metal genre.Â Rather, they came acrossÂ as trusty guides to the mostly young, mostly male devotees in the audience. The blue lights that beamed out from their guitarÂ necksÂ litÂ their pathsÂ through swells of lush metal landscapes.Â An underlying deep bass synth throbbed from out of the speakers, like some ambiguously benevolent underground life force. Each epic track built on its own individual trajectory and speed, but every one gave the impression of an arduous journey.Â StolidÂ and sure, the musiciansÂ led usÂ sloggingÂ and sprintingÂ through terrains simultaneously treacherous and awe-inspiring, accompanied by the occasional shriek, like some wild spirit passenger.

It was promptly midnight when Wolves in theÂ Throne Room desertedÂ the stage.Â The audience’sÂ half-hearted attempts for an encore signaled that they too were ready to retire afterÂ theirÂ trek through the dark sonic wilderness.