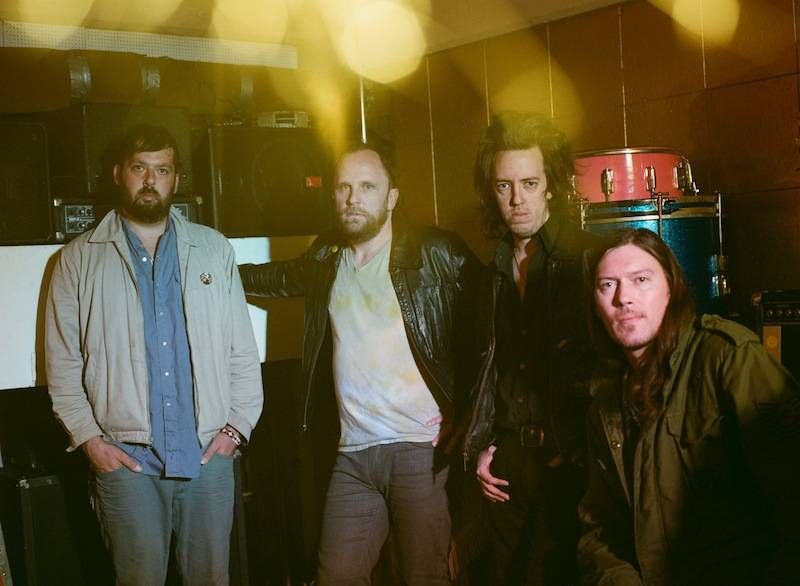 Chelsea WolfeÂ may have acted as somber escort to the new season for her solstice performance at the Electric Owl, but summer wasn’t officially started at the venue until this past weekend.Â With the city’s heat wave barely nearing its crest, the club’s offering of an early show was a welcome, air-conditioned respite.

Local indie-rock boy bandÂ The ShilohsÂ kicked off the night with their up-beat jangly tunes for a rapt audience tickled by disco-ball light.Â Ben Frey‘s bouncy drummingÂ and singer/guitaristÂ Johnny Payne’s happy-go-lucky attitude and goofing lifted the mood and buoyed it there, above the heat-induced lethargy. Payne swapped vocal duties with guitaristÂ Mike KomaszczukÂ and bassistÂ Daniel Colussi, who seemed more affected by the weather and their zig-zagging tour route up and down the Western coastline. The three vocalists, dressed in retro-casual chinos and open button-downs, crooned old and new songs about hitting the road and high school, amongst other sentimental topics. Their polished pep and boyish nonchalance were the perfect refreshing combination after a sweltering day.

The first time I saw headliners theÂ Fresh and OnlysÂ was four years ago when they opened for soul-garage eccentricÂ King Khan and the ShrinesÂ at Venue. Not one to be easily out-shone (literally and figuratively), the flashy Montreal rocker shimmied his way into my heart. Since then, the San Francisco garage-rock band, as a whole, has remained mostly off of my radar. When singerÂ Tim CohenÂ and guitaristÂ Wymond MilesÂ passed through Vancouver with their respective solo projects a couple of summers ago, neither performance was particularly memorable. Instead,Â Mode ModerneÂ (who opened for the latter) andÂ La SeraÂ (who played with the former) were the stand-outs. But Cohen and Miles, along with drummerÂ Kyle GibsonÂ and bassistÂ Shayde Sartin, more than redeemed themselves.

The Electric Owl was the band’sÂ fourth tour stop in support of this year’s Mexican Summer release,Â House of Spirits. The set began with theÂ apt “Summer of Love” off of 2010’sÂ Play It StrangeÂ – a sign that 2014 would be the summer that I finally fell top-bun-over-Chuck-Taylors for the foursome. After “Waterfall”, off of that same album, Cohen announced that the band would proceed to play their new album, in its entirety, without pause. That way, when we played our records on our home turntables, there would be no surprises. Among other requests, he asked that the audience move to the centre of the dance floor and not applaud. It was difficult to take the mohawked singer seriously, with his chinos rolled up to reveal red-socked feet in his American flag sneakers. The band, however, stuck to his promise.

The Fresh and Onlys, “Summer of Love”:

Several crowd members (myself included) couldn’t resist showing signs of appreciation, and didn’t heed their instructions. Miles, instantly recognizable for his mile-high hairdo, spun, posed and stumbled like a wind-up toy let loose on the stage. His hair, as it turned out, was not imperceptible to the laws of gravity or his stage-strutting. The most entertaining stage presence, he ironically seemed least present. For most of the set he played with eyes his shut, his expression that of inward bliss and concentration. The guys powered through nearly 20Â songs that ranged from indie-rock anthemsÂ to surf-influenced and classic punk rock. The set kept building momentum and crashed in cacophonous psychedelic waves for “Madness”. By the time the curfew had neared, all polite bedroom-listening decorum had evaporated. The infectious stage energy stirred several audience members into a squealing, dance frenzy.

Usually I am of the school of show-goer who appreciates divergence from the expected and not a regimented set-list that sounds exactly like their albums. Maybe it was my lack of expectations, or the perfect pairing of The Shilohs as openers that buttered me up forÂ the Fresh and Onlys at long last. Now the only surprise will be if, when I putÂ House of SpiritsÂ on my home record player, I am able to stop playing it on “repeat” for the rest of the summer.