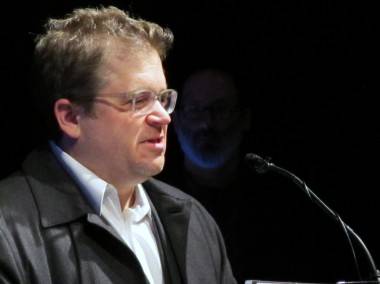 Wednesday night’s gala opening of the 11th Whistler Film Festival started with a jolt of star-power, as Patton Oswalt (interview below) was on hand to walk the red carpet and accept his award for Best Supporting Actor in Jason Reitman‘s (Juno, Up in the Air) new film Young Adult.

A brief welcome from the festival’s Executive Director Shauna Hardy Mishaw (a ginger-haired dynamo – and festival co-founder – whose passion and energy for everything WFF represents is positively infectious) included acknowledgement of certain challenges, setbacks and financial hurdles faced by the tiny mountain event during a year marked by worldwide economic distress. Whistler mayor-elect Nancy Wilhelm-Morden and the Festival’s Artistic Director Stacey Donen also took to the stage briefly prior to presenting Oswalt with his award. 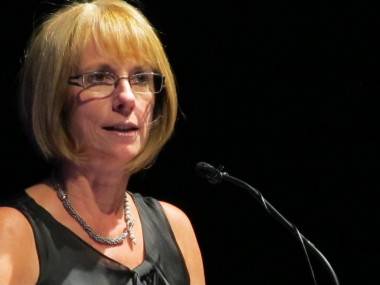 It’s no surprise that stand-up comedian Oswalt, perhaps best known for roles in King of Queens and Big Fan, seemed entirely at ease in front of the crowd. “I’m flattered to be here,” he said, before speaking at length about the importance of film festivals and supporting the kind of independent fare that is rarely seen outside of them. 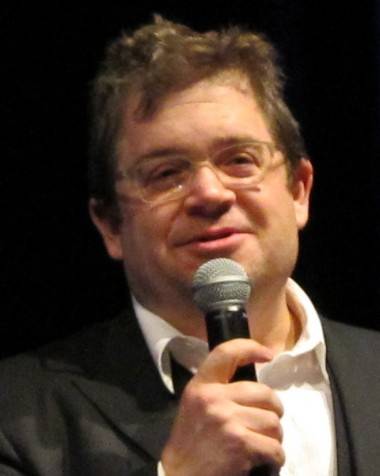 Written by Diablo Cody (Juno, Jennifer’s Body) and starring Academy Award winner Charlize Theron, Young Adult is a dark comedy about Mavis (Theron), a successful and narcissistic “young adult” author who returns to her small hometown with the misguided notion she can reclaim her high school-era boyfriend, played by Patrick Wilson after learning he has had a baby with his wife.

Oswalt is Matt Freehoff, a Star Wars-loving, action figure model-painting, moonshine-making man who lives in his parents’ basement after a vicious attack in high school leaves him permanently injured. In the film, Oswalt’s MattÂ  effectively operates as Mavis’ foil and conscience – the “neo-maxie-zoom-dweebie” to Mavis’ “mean girl”.

During a post-screening Q-and-A, Oswalt charmed the crowd with his down-to-earth, candid humour. “Maybe if Paul Giamatti or Philip Seymour Hoffman get food poisoning or hit by a bus” was the circumstances offered when asked what it would take for him to be cast in more leading roles.

The (mostly) character actor seemed keen to downplay his surprisingly successful foray into more serious fare. When asked how he got the part of Matt in Oscar-nominated director Reitman’s film, Oswalt discussed their friendship and a mutual, nerd-level love ofÂ  good movies.

Reminiscing about time spent in Vancouver shooting Blade Trinity with Wesley Snipes on a floating McDonald’s barge made famous during Expo 86, he jokingly recalled being “in a dressing room, 20 feet from Snipes who was stoned 24/7,” and the thrill of watching Robert Altman‘s McCabe and Mrs Miller in the same location it was shot.

Before leaving the stage, he voiced his disappointment at having to leave at 6 a.m. the next morning, thereby missing “so many great movies playing the festival” on account of the “promotional gulag” demanded by the release of a major motion picture like Young Adult. Despite his Whistler appearance being on account of a big studio film, he encouraged the crowd to embrace and support the work of independent filmmakers. 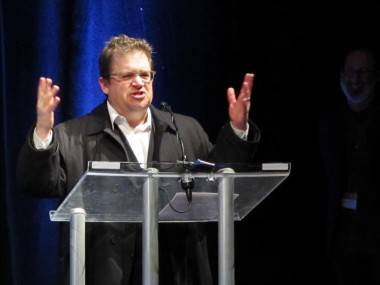 Patton charms the crowd during his Q&A. WFF’s Stacey Donen in the background. Rachel Fox photo.

Following the q-and-a, I was able to snag a few minutes of the actor/comedian’s time.

RF: She has such a distinct cadence to her writing which can be, at times… lyrically dense. Did you veer at all from the script of were you performing everything verbatim?

PO: We veered a couple of times because there were a couple of scenes that Jason wanted to be a fourth as long. So we cut a lot of stuff out. There were other scenes that he wanted to be longer. Again – it’s the confidence in Diablo’s writing, where she can go, “Yeah, if it doesn’t work then cut it.

I actually think this is very unlike Juno, in that Juno was this very non-judgmental look at how a certain subculture of youth communicates with each other. This movie is so much more about the failure of a lot of pop-culture references as you get older. This is such an accurate portrait of Gen X getting dragged into its forties and realizing that a lot of the pop-culture signifiers that you and I use as shorthand actually made us miss a lot of emotional connections in our lives and are losing their power a little bit. So it wasn’t as lyrically dense, as you said. I actually thought it was much more true to life. 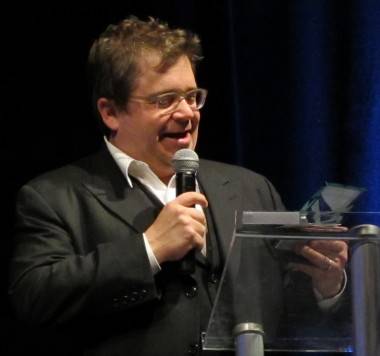 RF: I’d like to switch to an entirely different topic: you recently tweeted and made headlines when you witnessed some “over-sexualization” in a pumpkin patch, and over the course of some of the press you’ve done for Young Adult I’ve noticed you continuing to touch upon this topic [female oversexualization]. What went through your mind when you saw that? You live in L.A., you work in this industry and you don’t – no offense – present yourself in that way…

The first in a series of angry tweets by @PattonOswalt, who has over 500,000 followers on Twitter.

RF: Well, even if you could, you don’t. What is going on? It seems like the acceptability of really overt or aggressive female sexualization is becoming more mainstreamed…

PO: I think the whole over-sexualization of women does not come from youth, it comes from people who are in their 40s trying to act like they are 20. That’s what you get – the Kardashian mom [Kris Jenner] and this certain person [Phoebe Price] who went to this children’s pumpkin patch playground… it’s kids following adult examples.

Unfortunately, Gen X doesn’t not want to be 23-years-old anymore and [they] are trying to cling to that in the saddest way possible. For a lot of these people it means sexualization. It’s setting a shitty example for younger kids. Britney Spears didn’t just learn that out of the blue. She saw other idiot adults around her trying to act that way and thought, “Boom – I’m gonna do that.”

Stay tuned for more Whistler Film Festival coverage by Rachel Fox. You can follow her on Twitter @FoxMe.