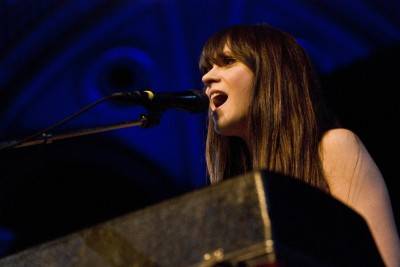 Review and photos – She andÂ Him at the Orpheum Theatre, Vancouver, Oct 24 2010

Before closing shop for the winter, She andÂ Him dropped by for a Vancouver concert on Sunday night for the last stop of their international tour.

The duo has attracted a heap of attention to their retro inspired pop-rock since 2006, after Zooey Deschanel and guitarist M. Ward met on the set of The Go-Getter (lead vocalist Deschanel was starring in the indie flick, while Ward composed the score).

TheÂ duo’sÂ breezy, throwback vibe was apparent from the moment they hit the stage with “I Was Made For You”. Its bright three-chord progression and cheery doo-wops from supporting vocalists the Chapin Sisters immediately warmed up the room; that, and Deschanel’s adorable personality, complemented by her flirty sundress and carefree dark tresses.

The Chapins hopped on the stage while banging on their tambourines, making the most of their last night on the road. Hats off to the trio for providing the band with flawless, earthy harmonies. Real-life siblings Abigail and Lily have also had a regular stint opening for She andÂ Him, therebyÂ having already introduced fans to the intricate folk songs off their sophomore record, Two.

I was thoroughly impressed by their perfect vocal synchronicity on the eerie a capella track “Sweet Light” and the alternative folk composition, “Let Me Go”. Abigail’s deep voice mixed with Lily’s lighter, bluesy tone echoed beautifully in the grand theatre. Their unexpected acoustic arrangement of Britney Spears’ “Toxic” took away the bubble-gum veneer of the top 40 hit and gave it a sinister edge that absolutely killed. 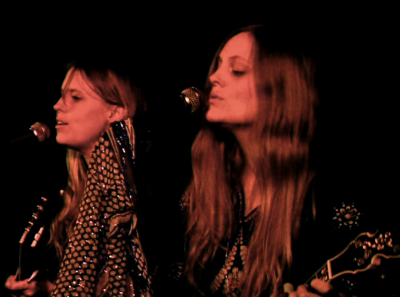 After a quick change of outfits, they re-appeared to back She andÂ Him for most of their set. The group barely took any breaths for the first half of the show, blazing through a mix of originals from their records Volume One and Volume Two and some standard oldies like Smokey Robinson’s “You Really Got a Hold On Me”.Â  Fans were delighted to hear M. Ward’s airy rasp on the soulful tune. Later in the night, he rocked out to “Roll Over Beethoven” and “One Magic Trick”, acting as the perfect advocate for the good ol’ rock ‘n’ roll that defined the ’60s.

On “Wouldn’t It Be Nice”, Deschanel took a break from her ukulele playing to discourage fans from clapping along as it distracted her rhythm. Only “she” could pull off snarkiness in a charming fashion. All her sarcasm was forgiven by the end of the night with her unrestrained performance of “I Put A Spell On You”. Her clear and unique tone was always apparent, but I was surprised when I felt the gut-punching power in her voice on the Screamin’ Jay Hawkins treasure.

She abdÂ Him’s shuffling romantic tunes like “In the Sun” and “I Thought I Saw Your Face Today” held their own against the classics, balancing nostalgia with a contemporary flare. The entire show felt like an education in post-’50s pop music. It was one class I was delighted to sit, and dance, through.

More She andÂ HimÂ at the Orpheum Theatre photos: