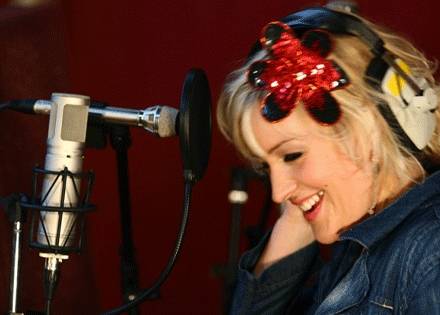 Alice Russell in the recording studio.

From the swelling organ that opens “Turn and Run”, the opener on Alice Russell‘s new album Pot Of Gold, the time warp begins… but it’s not disorienting.

You might mistake Russell’s electrifying howl for that of someone born 40 years ago, but the emotions are universal and the tunes are mostly originals co-written with collaborator TM Juke, along with a rather stunning version of Gnarls Barkley‘s “Crazy” (and if that cover doesn’t put her on the map, nothing will).

Besides four albums under her own name, including her 2004 debut Under the Munka Moon, Russell has collaborated with producer Nostalgia 77 (on a blues-y take of the White Stripes‘ “Seven Nation Army”) and Will Holland (on his Quantic and Quantic Soul Orchestra projects), Wellington reggae/dub band Fat Freddy’s Drop and, more recently, with David Byrne.

We reached Russell at home in Brighton, where the singer was working on a setlist for rehearsals with her band before going out for a bike ride along the seawall. 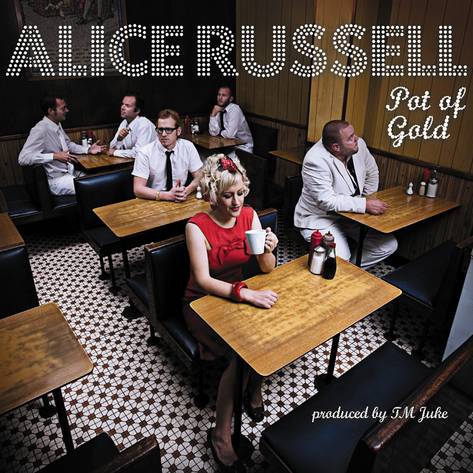 Shawn Conner: So you have a daily bike ride routine?

Alice Russell: No, it’s just when it’s beautiful. There’s nothing like riding around town at the end of the day and chilling out.

SC: Is there an artistic community in Brighton, or are you the only one?

AR: I’m the only one! [laughs]. There’s loads, actually. And every year there are new students who come, there are fashion and art and music courses down here.

SC: Have you lived in London?

AR: No, my sister does and I visit her. It’s 15 minutes by train. I love it down here. It’s perfect, I can zip over to London and then come back here.

SC: You have a collaborator, TM Juke?

AR: Yeah. The last couple of albums we’ve completely c0-written, then he produces them.

SC: When you were deciding on the sound of this album, were there any records you listened to and said, this is the kind of sound we want to go for?

AR: Yeah. I mean, it was all different for different songs. I remember we wanted to listen to some of the Al Green
productions where they brought all the strings and piano out. And there’s a Phil Johnson [not sure if I heard this name right – SC] track where they’ve really got the honky-tonk piano in a really lovely, slight-to-the-left–there was a lot of working out of panning stuff when we recorded it. But the actual album was just great stuff that came out people just got in the same room and recorded, and that’s what we did. We did three takes of each track, so it was more of a performance.

SC: Do you write in Brighton, then record in London?

AR: We wrote them in Brighton, and recorded here as well in a tiny little studio. It was quite a tight squeeze. We can’t afford big studios yet. [laughs]

SC: Speaking of costs, how big is your band when you tour?

AR: In Canada and the States we collaborate with the rhythm section of The Park, a San Francisco band, and three of the guys over from the UK – TM Juke, our violinist Mikey, he also sings. We can’t afford horns yet or backing vocals. Whereas in the UK, we’ve only just work out that we can add horns, so I’m really excited. It’s a shame. I’d like to take them all everywhere.

SC: You mention you’re working out the setlist. Is this for your jazz festival appearances in North America?

AR: I’ve already done most of that, for the boys. We’re rehearsing with the UK band tomorrow for this festival in August. I’m whipping their butts into shape tomorrow for a few days.

AR: Well, it’s tough sometimes. I’m the only girl. I’m thinking about getting one of those big horn things that help you speak louder.

AR: With things like covers, it helps people familiar with those songs get to grips with your stuff a bit better. I’ve learned that after not thinking it through and then it happens. A lot of people have liked it, which is cool. It was one of these songs that when it came out, it was so timeless. It felt like they’d rotated it, one of those songs you’ve known forever, and the lyrics are for everyone. It’s so enjoyable to do it and make sure those lyrics can really be heard.

AR: That was actually the producer’s choice, Nostalgia 77. I hadn’t heard the White Stripes’ version when he called me up, this was quite a few years ago. Againt, it was just one of those tracks, the lyrics were delight to sing.

SC: Are there any other covers part of your set?

AR: Well, the other day we had a go at “Tainted Love”, the old Gloria Jones [1976] version. And also because me and TM Juke are big fans of Rick James, we actually dared to do “Give it To Me Baby”, believe it or not. That’s only when we have the horns. You’ve gotta have the horns for that one.

SC: Yeah, yeah [like I know what I’m talking about]. It’s a horn-y type of song.

SC: I wanted to ask, what you’re doing with David Byrne these days.

AR: Well you know, we’re hanging out, we had a couple of kids. [laughs]

AR: He contacted with my management, and then me about singing on this album he’s written about Imelda Marcos, and each song’s about different parts of her life. And he’s got Tori Amos involved, Sharon Jones, I love her, Santigold and loads of different singers. And he asked me. And of course, when David Byrne asks you to do something you do it. ‘Cos he’s the dude.

SC: Are you singing in character?

AR: Yeah, that was the idea for all of us, we’re all Imelda Marcos at different points. I got that song, he cheated on her quite publicly, that’s my song. I quizzed him quite a bit, there were quite a few words in it, I don’t know if I should be singing that word like that.

SC: How do you like playing jazz festivals? Is it a good way to reach people?

AR: Festivals are great, they have so many genres under their umbrella. The main thing is, which is a selfish reason, quite a lot of the jazz festivals, hopefully you get to see some of your heroes as well. You end up catching some of your idols in concert as well.

SC: I saw Al Green in the summer. He’s a great showman–he was tossing flowers into the audience. When you do soul, is there a little pressure to be a performer as opposed to just a singer?

AR: Well, I think that’s part of it; it sort of comes out. I must admit I’m getting more into that extra showmanship, because it’s so much fun. As well as just singing the songs with your total, raw emotion. There’s all those bits in between. I’m working on different ideas for the show. It’s fun for us, it’s fun for the audience. It’s about getting everyone involved as much as possible. I think that’s where a lot of the great showmen of soul, it’s like James Brown as well, it’s just – whew! Tasty. But still raw, and not getting too contrived. It’s a fine line.

SC: Yeah, you don’t want to be too campy. I love the album cover, what’s the story?

AR: That was me and the photographer, a friend of Mikey the violinist in the band, we ended up taking charge of the album cover. That was our job. We searched high and low in London and came across this cafÃ© in the old street, basically opposite Liverpool Station, it’s owned by this lovely Italian family, they’ve had it for 45 years. The colours were perfect, and I wanted the whole band on the cover. It’s not just me, we’ve been together for five years. The idea of all of us sitting down to have a bit of a snack together after a gig. The idea of eating together is quite a soulful endeavour in itself.