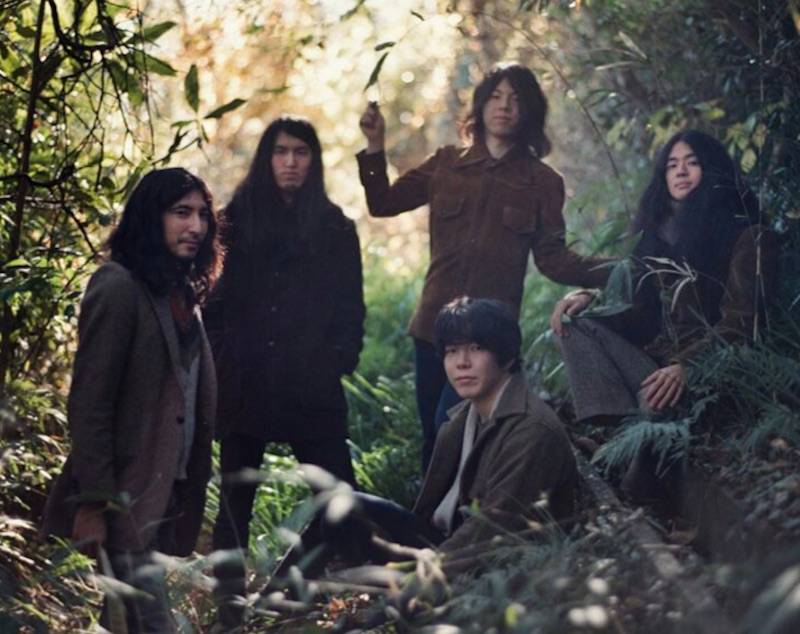 To anyone familiar with Kikagaku Moyo, it may come as a surprise to learn that the band began as a busking collective in 2012.

But unlike your typical street performer, they weren’t regurgitating hackneyed Beatles covers. Instead, the band spent their early days refining their improvisational abilities. During their sold-out show at the Fox Cabaret, the band jammed with skillful ease and cemented their status as psych rock virtuosos.

The Tokyo-based band is currently on a North American tour behind their latest endeavor, Stone Garden. The 2017 EP emphasizes the group’s flair for pulling from such disparate influences as traditional Eastern folk, Krautrock and ‘70s blues (translated, their name means “geometric patterns”). On stage, this expertise took full flight. Much of the night saw the group rollicking with a few, long stretches of noisy freak-outs. They started soft, lulling the audience with a trio of guitars and the warm echoes of a sitar. Their jamming spiraled upwards and outwards until it finally thrust into the bouncy “Green Sugar” off of House in the Tall Grass (2016).

The Fox proved to be the perfect setting for these freeform jams. The venue’s intimacy, combined with a video backdrop of shifting, liquid shapes,  amplified the band’s otherworldly sound. As a general rule, this writer feels that live improvisations can run the risk of becoming exercises in self-indulgence. But Kikagaku Moyo improvised with so much aplomb that it was impossible to feel restless during these moments. Their off-the-cuff arrangements were sophisticated, controlled, and sumptuous. As they riffed, the three guitarists–Tomo Katsurada, Daoud Popal, and Kotsu Guy–turned to face each other, nodding their shaggy heads to the beat. The bandmates were so attuned with one another that their chemistry was almost psychic.

Vocals weren’t at the forefront, but on occasion harmonies would add texture to the music and float amongst the ripples of sound. One example was “Kodama” from Forest of Lost Children. Katsurada’s gentle voice was soothing, complementing Ryo Kurosawa’s jangly sitar riffs. A few concertgoers tried to film the number on their smartphones, but soon gave into the hypnotic rhythms and bobbed along with the rest of the crowd. The song inspired the most dancing and received some of the biggest applause of the night.

But the real highlight of the evening was “Silver Owl.” A highlight of House in the Tall Grass, the epic began in a peaceful haze before building to a smashing, doom metal-laced finale. Amidst the distortion of guitars, Go Kurosawa’s drumming anchored the tune. Throughout its ten-minute sprawl, the audience was entranced. Kikagaku Moyo is band that should be experienced rather than simply heard.