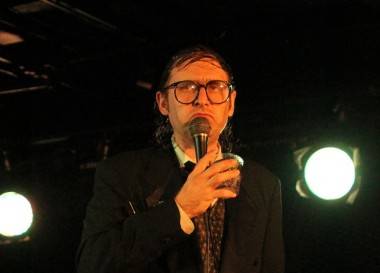 “We’ve got a couple more gags…”

So sayeth, repeatedly, Neil Hamburger. The “comedian”-with-scare-quotes (his shtick is more of a parody of comedians) performed a set at the Biltmore Saturday night (July 10) for the faithful.

And that makes all the difference; opening up for indie-rock bands (Pinback), big-time alt-rock bands (recently, Faith No More) or joke bands (Tenacious D), Hamburger incites near-riot like reactions from an audience not prepared for extended riffs on Red Hot Chili Peppers‘ heroin habits and the most offensive Michael Jackson jokes you can imagine (nice to see last night that Jackson’s untimely death has done nothing to make Hamburger rethink inclusion of said jokes). 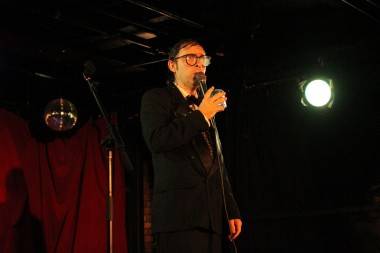 But reeling off, in a whiney, put-upon delivery, his hilariously ridiculous (and often long) set-ups and flat punchlines, Hamburger – the picture of a hack comic in a third-rate Laff Barn in the outskirts of Hamilton – can achieve that sweet spot where those that get it are tearing up with laughter. And this is precisely how Saturday night’s set went.

Neil Hamburger (aka Greg Turkington) had the assembled indie-rock (and some comedy) fans howling for a solid 40 minutes at some “topical” humour (BP is the worst environmental disaster since the overflowing toilet in Crosby Stills and Nash‘s dressing room) as well as what he called his “greatest hits” (i.e., the Jackson, Madonna, Courtney Love and RHCP jokes). Free of the hecklers (but for one guy, whom Hamburger immediately called “a prick”) who sometimes can turn a Neil Hamburger set hilariously antagonistic, everyone was in on the joke. I’m just not sure which kind of show I prefer. 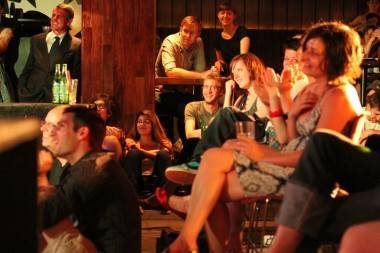 Paul Anthony, who hosts a variety show the first Wednesday of every month at the Biltmore called Talent Time, assembled an all-no-star lineup to open the show: I Kandi, a large man who calls himself a teen pop sensation and performed two rather awful but hilariously accurate Top 40 dance-type songs; Rick Valiant, a Frank Sinatra impersonator who doesn’t sound like Sinatra at all but who watched the rest of the show with a bemused expression on his face; and Anthony’s alter ego, Hugh Phukovsky, looking like a super-villain. 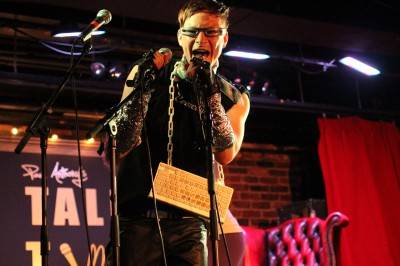 Although the Phukovsky shtick overstayed its welcome by a few painfully outrageous jokes, as well as much use of that thing that makes Cher‘s voice go all warbly in “Believe”, the other two added just the right amount of weirdness to the night.