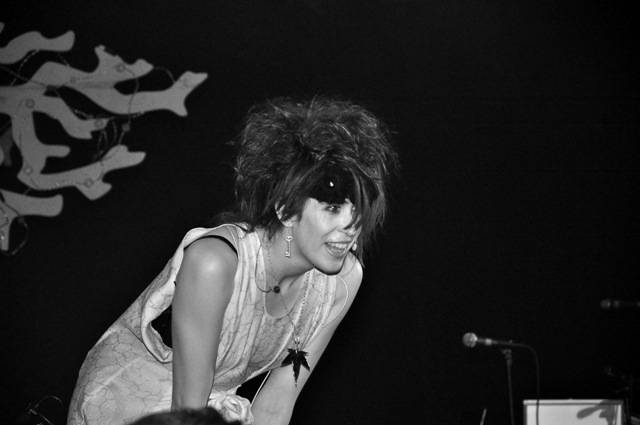 Review and photos – Imogen Heap at the Commodore Ballroom, June 15 2010

Imogen Heap’s first visit to Vancouver in oh, about 12Â years was just a bit overdue. With three solo albums giving her bird’s-nest of a hairdo some extra volume, the singer had more than 40 songs to choose from for her set at the Commodore Ballroom on Tuesday night.

Taking full advantage of the social media page and with the help of  the linkedin direct message automation, Heap opted to try something a little new – setting up an online poll during the tour so that fans could tailor the show in their city, with the top 12 most popular songs making the playlist and a few of her own picks thrown in.

An appreciative crowd greeted the quirky British songstress as she took to the stage twirling what looked like a tube from the back of a washing machine. Apparently the “instrument”’s silence was not part of the plan as she apologized to the crowd and asked if we all minded terribly if she went back to house music while she figured out the problem.

Sound issues sorted out, Heap restarted the show a few minutes later (washing machine tube twirling and humming into the microphone attached to her wrist), as she kicked off the evening with “The Walk” (from her 2005 record Speak For Yourself), moving around the stage from synthesizer to see-through grand piano and back to her mike. The whole band multi-tasked all night. The guitarist was set up with a laptop for mixing sounds, the bassist had a tabla in front of him and the drummer had all sorts of chimes and metal strips hanging close by for creating unique percussion sounds.

Playing what she referred to as one of the first half-decent songs she wrote and the one that got her a record deal, Heap took to the grand piano for “Come Here Boy” (from the 1998 debut Imogen Heap album I Megaphone). “Wait it Out”, a song from her latest album Ellipse, was penned sitting on a cliff in Hawaii as she wished for some new music magic so that she wouldn’t have to resort to working a desk job. It worked. Ellipse was nominated for two Grammy awards – Best Pop Instrumental Performance for ‘The Fire” and Best Engineered Non-Classical Album, the latter which she won.

As she attempted to loop sound from swirling the rim of a half-full wine glass for “First Train Home”, she explained to the audience: “Just a tip when I am recording and you go ‘woo’ [cheer], you might get woo and then it will loop ‘woo’ [throughout the song].” Not that it would be any different from the musician’s organic recording process on Ellipse, wherein random sounds of life, like a radiator, fridge or tap dripping, were picked up on tracks. 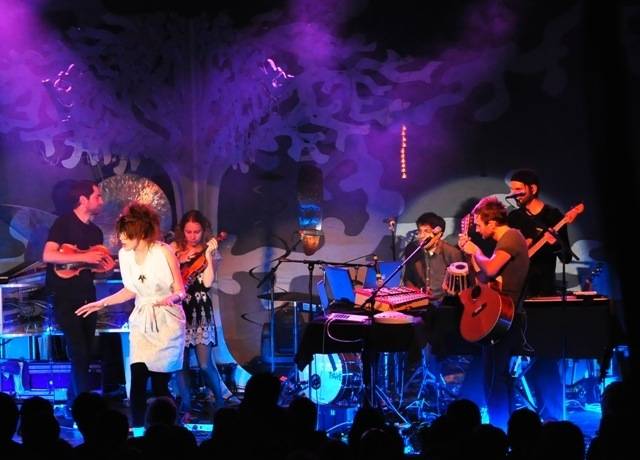 Part way through the night, Heap called local singing duo Meliah up to perform a never-been-heard-before version of “Earth”. Fans in each city on the tour have the opportunity to submit an audition video for the chance to perform on stage with Imogen Heap at one of her shows. The beautifully harmonized a cappella accompaniment will be available shortly on the singer’s website. (“It’s so much fun to have new blood on stage every night, I can’t wait to experience this! It’s completely crazy of course but will be great fun! – from Imogen Heap‘s website.)

Continuing with the cooperative theme, she then asked the audience to pick a key for her next song, shaped by a short melody provided by someone in the crowd. She has been taking these melodies and key suggestions and improvising with them to create the beginnings of a new song. These songs are available on her website as a digital download for a small charge, with the proceeds from each city going to a local charity. HeapÂ chose the Wilderness Committee to continue protecting Canada’s biodiversity. After performing the improvisation, she posed with a Wilderness Committee banner for fans to take pics and share online.

A combination of expected songs – “Goodnight and Go”, “Headlock” and “Let Go” – with fan collaborations and improvisations made for an engaging and unique performance that left little doubt as to Heap’s wacky musical genius. “Hide and Seek” (which newer fans might know from the tragic sampling in Jason Derulo’s 2009 Billboard hit “Whatcha Say”) would have been the perfect end to the night if it weren’t for the bar staff in the back talking and crashing around over top of the final song.