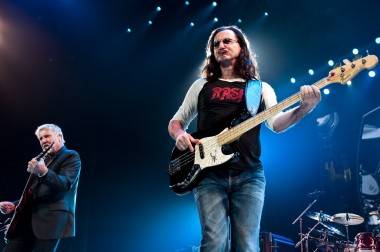 The band’s 2012 album Clockwork Angels entered the charts at #1 in their native Canada and #2 in the U.S.. The album has spawned three top five hits at Classic Rock radio, including “The Wreckers”, “Caravan”, and “Headlong Flight” . Rush’s latest single is “The Anarchist”.

At the end of 2012, Rush won both the Band of the Year and Album of the Year awards at the Classic Rock Awards in London, UK. This year, Geddy Lee, Alex Lifeson and Neil Peart will be inducted into the Rock and Roll Hall Of Fame at the momentous ceremony in Los Angeles on April 18.

Rush kick off their Clockwork Angels North American Tour 2013 on April 23 in Austin, TX and will visit Ft. Lauderdale, Orlando, Nashville, Raleigh, Virginia Beach, Baltimore, Uncasville, and Atlantic City this spring. After returning from their European dates, a second leg will begin in June which will include stops in Hershey, Wantagh, Saratoga, Chicago, Cincinnati, Milwaukee, Calgary, Vancouver, Portland, Salt Lake City, Denver, Kansas City, Hamilton, and will return to Grand Rapids and Halifax for the first time in decades.

Clockwork Angels is the band’s 19th studio album. Rush formed in Toronto in 1968.