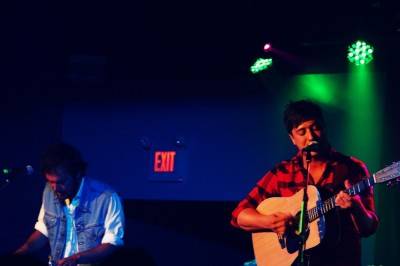 London’s Mumford and Sons return to Vancouver for a show Oct 23 at the Vogue Theatre. Before their last show here, at the 560 Club in May 2010, Catherine Carmichael had a chance to sit down with the band’s Ben Lovett (vocals, keyboards, accordion) and Ted Dwane (vocals, bass). Mumford and Sons are on tour in support of their 2009 debut, Sigh No More, which features the hit “Little Lion Man”.

Catherine Carmichael: Has the band ever been to Canada before?

Ben Lovett: Yeah. Only the East Coast though. We’ve been to Toronto a couple of times. Three times now actually. Montreal too.

CC: And you’re liking it here?

BL: Well if Susan Boyle’s the top of the charts then… [laughter]

Well we’ve got a lot to be thankful for: people actually wanting to support what we’re doing. Like, there’s an independent radio station in Australia called Triple J and they really got behind us quite early on and they basically told a lot of people what we were doing. So, January this year was our first tour of Australia and by the time we got there, we hadn’t been number one, but we had already had a certain amount of success just from word-of-mouth, from people who found out about us through the radio. And then we went into gigs, and that’s kind of where we like to think that that’s where we are tried and tested, really. So, the gigs went well and then we go back and do more. And that’s what we’re doing and what we try to do.

[This is the part of the interview that was interrupted by the sound check that was going on in the venue. No matter where we went, all the speakers in the place were hooked up to the sound check, blaring “one, two, hey, hey, one two.” The gentlemen of the road were deeply apologetic, laughed with me, and called their manager to get the sound downstairs turned down.]

CC: Now, instead of going right to producing your first album, you did more live shows, touring and performing. What was the reasoning behind this, because artists don’t usually do that.

TD: There wasn’t any real reason. It was kind of the way it panned out. We never really had a plan. So it was only when people started asking, “When is the album coming out?” that we thought, “Oh, maybe we should record now.” Before that we released three EPs – very limited release – on vinyl and digital download only. But yeah we always considered ourselves a live band so we focused on touring. Even making the album was in a stolen window of four weeks between tours and we just went in the studio and the day we finished we literally loaded instruments out of the studio into the bus.

CC: Did you have any difficulty breaking into the scene in London? Is it quite competitive?

BL: London’s just a bizarre musical melting pot. I think there’s a point where it worked out where there was like 10,000 active bands playing in London at thousands of venues and every night there are gigs. So, I think it is very hard for a lot of bands to break out of that but we’ve never had a mission, we’ve never tried to achieve anything apart from having fun and playing the songs we really love playing.

We were lucky enough to be taken on the road as a support band for a couple of tours. I think we really try to live up to that privilege and play as hard and as well as we can. We’ve done, like, over ten tours in the UK before this first North American tour. We just kept saying yes to any gig out of London or in even in London. It was like, “Do you want to come to Oxford and play in the basement of the university? In Brighton above a pub?”  Wherever it might have been we were just like, “Yes, yes, yes. We’ll do it.” ‘Cause we didn’t really have much to lose at the time.

TD: We didn’t really have much else to do!

BL: We all wanted to be musicians but we all half-maintained day jobs but none of us liked them and we happily jumped out of them if we needed to. It was born out of a love of playing songs and a love of touring that I think give us a kick start. We haven’t wanted anything but that. It really is the case.

CC: This might be a bit of a cliché but has it been a bit of a whirlwind since you’ve been a band since 2007? It sounds like a lot of touring and work from the get-go, given it’s only 2010…

TD: Yeah, I mean in terms of the intensity, like, we did say yes to every gig we were offered and we were really busy, you know, ’cause there were a lot of gigs. So, we’re not really any busier than we were a couple of years ago and it’s been quite gradual. When we go back to and tour in Europe within a week we’ll play in a big venue in Germany then to like a half-full bar in France. It doesn’t feel like much has changed. Because we did those support tours so we played some big shows then and we still play small shows now. We haven’t really sat still for a moment so in that sense I guess it’s a whirlwind but we haven’t really noticed any sort of dramatic change.

BL: And when any record label tries to get us to take stock of any success we’ll just change the subject to touring, when the next gig is, the next tour, because it’s a healthy way to live life staying active in the things you’re really passionate about, and we just love traveling and playing gigs. So, as far as the success of that goes, setting up a gig like tonight is a really big deal for us and we didn’t anticipate that would happen. Now that it has, we’re focused on making sure it’s a good show and come back. It’s a simple end, really.

CC: How was working with Arcade Fire’s producer, Markus Dravs, on your first album?

BL: Pretty great! He’s an incredible leader. He helped guide us through what we knew we wanted to do, which was represent where we got to. Our album is like our setlist, where it got to, pretty much, apart from “After the Storm”, which is the last track on the record – that was like our ultimate setlist for gigs. So we wanted to capture the energy of the live shows and capture the progression through the album like you would at a gig and he just made sure that we weren’t going to deviate from that too much. He’s very switched on, healthy-minded, and it’s important to be around that.

CC: And a sophomore album is coming up… soon?

BL: We’re writing as much as we can but you know, it’s perhaps the only downside to being on the road all the time. We’ve all got songs coming out of us but we’re containing them, trying to give them shape and definition, needing a little bit of perspective to do that. So our next real break from touring will be December, we’re on the road until then and that is when we hope to get these ideas together, but whether or not we record them… because we have to work out the songs that are good enough. So we don’t want to say, “Yeah, we’ll have an album soon.”

TD: Everything’s been a happy mistake, we haven’t planned for it.

CC: Rumours have it Mumford & Sons will be working with Ray Davies of the Kinks.

TD: Hopefully! We heard that too probably in the same way you did!

CC: On the Internet! So what does it mean, how do you feel?

TD: It’s amazing. I think the nature of the project is contemporary bands collaborating with Ray Davies doing Kinks songs. That’s about all we know! We’ve got a few dates penciled in, we haven’t met him yet. But we’ve forever been massive the Kinks fans. We really feel a huge affiliation, being music from London.

CC: Do you have a favourite album of the Kinks?

BL: I’ve got a favourite song: “Strangers”. It’s one of the best tour songs ever written. Every band writes songs about being on the road and how it makes you feel but every time I hear that song it makes total sense.

CC: And that feeling that you’re talking about, does it get translated into any of the new songs you’re writing?

TD: Yeah, a couple of them along the way, definitely.

BL: we’re quite an experiential band and a lot of Sigh No More as a record was written from direct personal experience. And now that our personal experience is vastly being on the road, it would be surprising if it weren’t including that.

TD: In England people talk of an “indie landfill” which is basically a lot of music that feels like it’s a bandwagon, it’s fashionable music, and so it sells that way. And the four of us, as individuals have only ever been interested in the music that comes from somewhere a little bit deeper than that, which may seem a bit silly because music is an art form but the whole nature of it should be expression. We don’t have any interest other than sending out good vibrations, positive vibrations. The whole reason why we love touring and gigs is because of the connection of people, sharing a night of goodness, wholesome, positive good times.

BL: This whole “happy accident” mentality means that we’ll never try to sway anyone to like us or listen to us if they don’t want to. We’re not writing music for people, it just is an expression, as it should be, and we’re not catering to other peoples’ needs. I think we have a certain amount of integrity between the four of us to keep each other in check, to make sure we are expressing ourselves as a four-piece.

It doesn’t go beyond that. One of the sides of that is that we haven’t got any A & R, we haven’t really got a record label ‘cause we are our own record label. We’ve licensed it. So we make our music without a “suit” coming in, which is fairly rare these days on the big scale for bands to be able to make the music that they want to make, which is quite sad. It didn’t used to be that way. Bands should be able to make the music they want to make.

TD: There’s a lot of moulding and dilution along the way.

CC: do you think that’s part of the draw of fans to Mumford & Sons is that they can see and feel the good vibrations, that it’s not just something “cookie-cutter?”

TD: Yeah I hope so. I mean it does really feel straight from us that whoever’s ears are listening, nothing really comes between that, it’s a pretty direct connection and I hope people would be able to sense that. Not saying that we’re the only people to have done that…

BL: You know there might be a band that Ted really likes that I don’t particularly like but it means a lot to that person and that they feel that connection. We’ve managed to find these people, these fans, who we are so glad to be on this journey with, who seem to connect with what we’re doing. To their ears, what we’re doing is direct to them.