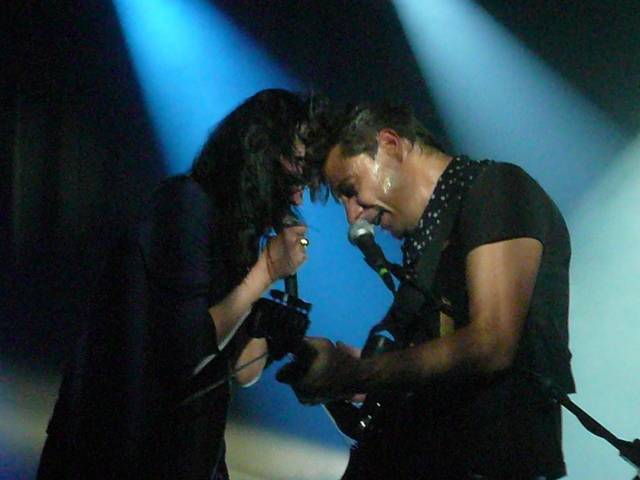 The Kills at the Commodore Ballroom, Vancouver, May 16 2009. Amanda Hutchison photo.

Review – The Kills at the Commodore Ballroom, Vancouver, May 16 2009

With three highly acclaimed albums under their belt, London-based The Kills finally ventured out to North America for a full-scale, headlining tour. The two-piece features lead singer Alison Mosshart and backing vocalist Jamie Hince, both on guitar, along with a drum machine. This minimal, raw setup, as well as their darker lyrics, has set them apart from other girl/boy acts such as Mates of State and the Ting Tings.

The last time The Kills came through town was to support The Raconteurs at the outdoor venue the Malkin Bowl, in September 2008. Their set list was short, lackluster, and didn’t excite the audience as much as it could have. It was a completely different story Saturday night, as The Kills completely commanded the stage. I had no idea Vancouver contained a following of Kills fans – people were dancing, clapping, and singing along at the top of their lungs. The usually sinister Mosshart actually cracked a smile at the crowd’s energy.

To my surprise, the band spewed out all of their hits in the first set. My excitement rose as they started to play “No Wow”, one of my favorites, the fourth song in. The biggest crowd-pleaser seemed to be “Cheap and Cheerful”, with the most complicated and quick-paced use of drum samples. They even whipped out a cover of the Patsy Cline classic “Crazy”. Personally, the highlight was “Fried My Little Brains” – one of The Kills’ best songs, and one the duo didn’t play the last time I saw them.

Sometimes, watching Hince and Mosshart’s on-stage antics, you can’t help but wonder, “Are they sleeping together or not?” Their album covers and random photo shoots make it look like they’re best friends, but watching Hince get Mosshart in a headlock as they sing into the same microphone, eyes locked on one another, suggests something deeper. Their musicianship is bonded with chemistry, and even playfulness, as Hince pretends to shoot Mosshart with the neck of his guitar.

As The Kills exited the stage for their quick break before the encore, the crowd literally went insane. There were feet stomping, fists pumping, and chants of “Kills! Kills! Kills!” filling the venue. When they returned, the band tore into Screamin’ Jay Hawkins‘ “I Put A Spell On You”, which gave Mosshart a chance to show off her howling vocals. They never struck me as a band that did covers, so it was interesting to hear their renditions of a couple songs off Rolling Stone magazine’s 500 Greatest Songs of All Time list.

Although the band fit quite an amount of tunes into their set, by the time they had left the stage for good, it almost felt like they had finished too quickly. It must have been because I was left wanting more, since I felt almost robbed from their opening slot for the Raconteurs.

Speaking of which, once The Kills’ current tour wraps up, Mosshart will join the infamous Jack White, Queens of the Stone Age’s Dean Fertita, and The Raconteurs’ own Little Jack Lawrence to tour with rock’s latest supergroup The Dead Weather. My only concern is: how will she fare without Hince? Will she share the same electricity with The Dead Weather? I can’t wait to see.

The Kills at the Commodore Ballroom, May 16 2009. Amanda Hutchison photo