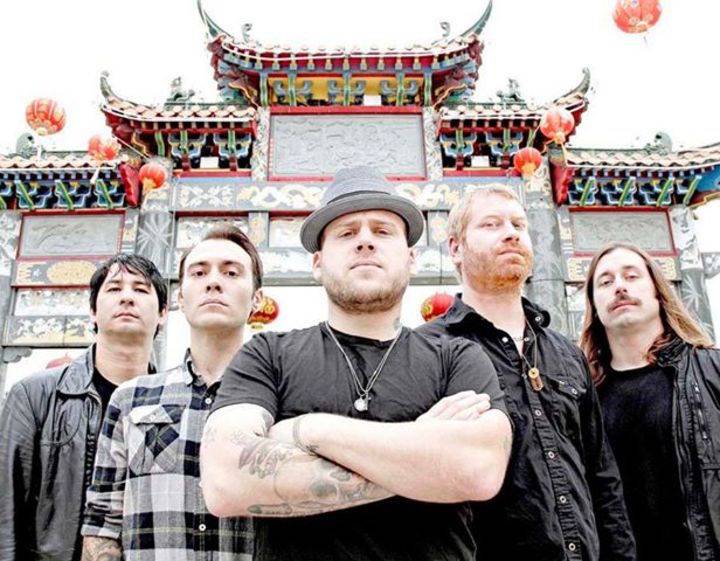 The Bronx circa now.

Capsule review – The Bronx at the Biltmore Cabaret, Vancouver, April 4 2017

The Bronx played to a packed house Tuesday night at the Biltmore Cabaret in Vancouver.

This was the third show of the group’s current tour. The Los Angeles quintet, which formed in 2002, tore through tracks from their four albums, including their most recent, 2013’s Bronx IV.

The dancefloor was a throbbing moshpit throughout the hour-plus show. Fans hurled themselves off the stage, as did ball-of-energy vocalist Matt Caughthran. Caughthran seemed impressed by the level of activity, and repeatedly incited the crowd (or “motherfuckers” as he liked to call us) to “make some noise.” It seemed as though the shrapnel-voiced singer was letting his voice rest between songs. Later in the set, he saluted the “madmen, sideline hustlers, playboys and playgirls” in the audience.

Guitarists Joby J. Ford and Ken Horne, bass guitarist Brad Magers and a drummer who may or may not have been David Hidalgo Jr. (mentioned on the band’s Wiki page as the current skin-basher) frenziedly delivered the outfit’s trademark razor-sharp punk rock.

Although this reviewer isn’t familiar with the band’s first three albums, the set seemed to cover most everything, except tracks from its alter ego Mariachi el Bronx. Songs included “Heart Attack American”, “Shitty Future”, and “Six Days a Week”, along with Bronx IV tracks like “Ribcage”. Between “Pilot Light” and “Too Many Devils”, also from that album, Caughthran proclaimed, “I like this place, it’s a little like a weird underground vampire lair.”

There might have been some new material. Caughthran promised that The Bronx, which hadn’t been to Vancouver in years, would be back soon, in support of an album that the band has been recording. That probably won’t be for awhile; after the current Canadian tour, the group heads over to Europe for festival shows in the UK and tour dates in France with Against Me!

Philadelphia’s Dave Hause & The Mermaid and Vancouver’s The Spitfires opened the show.