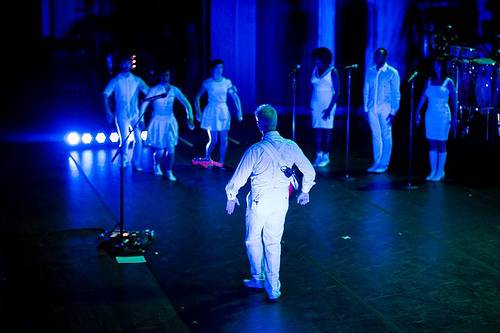 I knew the woman drinking pre-show at the bar with her daughter didn’t know what she was talking about. Still, for a few minutes it was fun to think she might be right, and that Brian Eno would be joining David Byrne and band onstage for Byrne’s Queen Elizabeth show Friday night.

Anyway, Eno was there in spirit, if not in flesh. Reaching back into the two musical eggheads’ 30-year collaboration, Byrne had a wealth of material to draw from, including the breakout 1979 Talking Heads disc Fear of Music and its 1980 groundbreaking follow-up Remain in Light. With their forward-looking production and, in the case of Remain in Light, the world music-influenced rhythms, the songs have stood the test of time, and then some.

The truly devoted – and there were many in the audience; enthusiasm was high, and people were dancing in the aisles for as much of the show as the ushers would allow – were no doubt enraptured to hear a track from the more daring 1981 Eno/Byrne collaboration My Life in the Bush of Ghosts. On that song, Byrne and backup singers—Kaissa really let loose – provided vocals in place of the found tracks used on the disc. “For copyright reasons,” acknowledged Byrne.

But what really put the show over the top, at least for this audience member and, admittedly, fairweather fan, were the dancers. The three backup vocalists and four-piece band (including two percussionists) were, of course, fantastic – one would expect nothing less from the 56-year-old Byrne than to put together a crack band of musicians for his first tour since, I believe, the release of 2004’s Grown Backwards album. Lily Baldwin, Natalie Kuhn and Steven Reker busted moves to choreography by Annie-B. Parson, Noemie Lafrance and robbinschilds that was by turns sexy, funny and sly, and which almost made me see the point of modern dance.

If the show had a weak link it was the new material, written with Eno, from last year’s collaboration Everything That Happens Will Happen Today. The tunes aren’t bad, it’s just that songs like “My Big Nurse” are pretty light and fluffy compared to vintage, percussion-heavy – and yes, edgy – Talking Heads material like “I Zimbra” and “Houses in Motion”.

But there was a definite through-line from the gospel-tinged “Heaven”, from 1979’s Fear of Music, to Everything That Happens‘ blissful title track, which – along with a fabulous, sexy “The Great Curve” – helped close out the show.

Then again, there’s no reason to expect, or even want, Byrne to do anything but what pleases him; his instincts have been pretty right-on for nearly 30 years. And who can complain about a show that includes roof-raising versions of “Take Me to the River” and “Burning Down the House”?

One response to “David Byrne at the Queen Elizabeth Theatre”