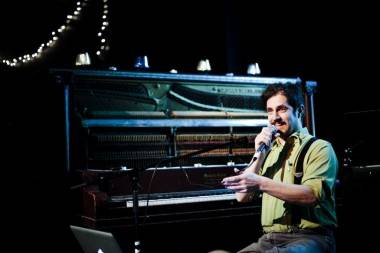 Bob Wiseman took to the stage of the Tranzac Club in Toronto Thursday night to premiere his new album, Giulietta Masina at the Oscars Crying (Blocks Recording Club/God Finds Cats).

1. Giulietta Masina at the Oscars Crying
2. Lobbyists at Parliament
3. Mothface @ yahoo . ca
4. The Reform Party at Burning Man
5. Robert Dziekanski at the Vancouver Airport
6. Children at Play
7. Aristide at the Press Conference
8. Neil Young at the Junos (download)
9. Portrait of Phil at Various Times in a Closet
10. Ruby Bates at School