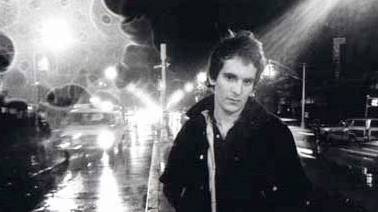 Go on then. Ask me about the time we had dinner with Alex Chilton, in Minot, North Dakota. The Magic We, Shawn Conner, Hali W and me. Driving six point five hours (after hard partying the night before) hell-bent for the North Dakota State Fair and a date to see the Box Tops. a date really with Alex Chilton. Hey, I still have my ticket stub! July 20, 1987. Alex was 37/i was 24.

Who turned me onto Alex? As a kid in the late 60s, I heard and I loved The Letter, Cry Like a Baby, Soul Deep. I didn’t know Alex Chilton from Chips Moman. I was in grade school. Later on, I was turned on to Elvis Costello, The Jam, The Stranglers, Sex Pistols, and The Clash. I was a teenager. Still didn’t know who Alex Chilton was. Then, in my late teens, I met a real music lover, Peter Sherman, he was 15? and He Turned Me onto The Replacements, Husker Du and Soul Asylum, too. Somewhere in that meeting, in this freely flow of American alt music, Alex Chilton came to me. like a rush, a torrent, through my punk rock soul. Remembering the beauty of The Letter. Sometimes, it’s all about interpreting a great song. And, if you notice, Alex’s albums are filled with songs written by others. He wasn’t so vain.

And just before Minot, Paul Westerberg wrote a song called Alex Chilton (1987). I Love the song. i break myself in two

dancing it, the line about rape, well, that always makes me squirm.

who did i see playing a cover of it recently? I can’t remember, one of those brilliant Winnipeg bands.

Another music loving friend, Guy met Alex at a big fair event. Guy told me about getting together with Alex after the set and just talking with him. That older, wiser Alex was a down to earth fella, who just happened to have written some great songs in the 70s and 80s. So, Shawn, Hali and me had ourselves a (sacred) mission. We arrived in Minot, in time to pay our concert admissions, find a motel and hurry back to Just catch Alex Chilton and the Box Tops. 4 songs. The big hits and the Box Tops were the same three backup musicians for every other 60s act there.

We waited, near the Security guys. Some bearded guy on stage sang Little GTO. And when that was done, there was Alex and the bearded guy. They were some distance away and I used my Real Big Voice to yell, “ALEX!” Alex turned and I waved. He waved back, without missing a stride and went on. Oh well. Then, something happened. He turned. Alex Chilton walked towards us. Yay!

We gave him our sob story, the long drive, no sleep the night before and hearing four songs. With his quiet, smooth, Southern accent (New Orleans?), he invited us to join he and Buck for dinner.

Over dinner, the conversation was beautiful. Political. Human. We talked about the ugly side of America, Reagan/Bush (the father), the crime and fierce gun play of New Orleans, talked about the beautiful side of people, socialism, music and time flew by. We laughed. We ate. I remember he didn’t seem thrilled with that Alex Chilton song (that I Love so much!). I hope he ended up appreciating where it came from, Paul Westerberg’s heart and love for a great songwriter.

When I listen to Paul Westerberg, I hear the songs of Alex Chilton. I’m listening to one of those great Alex Chilton inspired songs, Can’t Hardly Wait. and yes, I’m crying. Like a baby.

Heroes sometimes fail us. Paul Westerberg told me to, “Fuck off!” Just after I gushed about how much his music meant to me and my friends. I hope Paul’s all grown up. now. that was a long time ago…

Alex Chilton had some tough years, growing up years. Chemical years. When we met him, he was all grown up, and he was beautiful. He and Buck were both beautiful.

All day, I’ve been thinking about this. Writing this. and there’s nothing I can say. my useless words, really. I just Love his music. and that little blip in time, when Shawn, Hali and me had dinner with Buck and Alex Chilton. Thank you for turning around and walking over to us, and listening…

(What do you remember Shawn?)

you have a Mission too,

(sacred and profane as it will prove to be)

Your Mission is to discover and/or rediscover the following:

Box Tops. The Letter. check his Voice at 16. Cry Like a Baby and Soul Deep.

there was a time, when i couldn’t pass a day by without a little Big Star, without Bach’s Bottom, so fine American punk rock. Like Flies On Sherbert. pass the chems and booze and yes, it is slop punky music and production.

That time passed, I moved away. Left my turntable to a friend, Sergio. My records with my parents. When i returned to Winnipeg in 2004, i didn’t get my turntable back until after my marriage blew up. It’s playing my 33 and a third records at 30 and a third. Oh well. I have my Box Tops, Big Star, Alex Chilton, Tav Falco vinyl just waiting for me to get that turntable fixed. focus eugene, through the tears…

Thirteen. September Gurls. No Sex. In The Street. Take Me Home and Make Me Like It.

He produced The Cramps.

Your mission is as beautiful as Alex Chilton was to three Canadian 20somethings, on a July night in Minot, North Dakota.