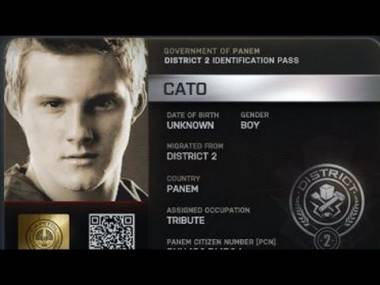 A couple of days before the official opening of The Hunger Games, actorĀ Alexander Ludwig enters the lavish boardroom of the Shangri-La Hotel in downtown Vancouver. Eager and excited, he’s here to talk to a group of journalists about his role as the villainous Cato in the movie, which isĀ based on the titular Suzanne Collins bestseller.

The film depicts the world of Panem, which is divided into 12 districts that must sacrifice an adolescent male and female tribute every year for a deathly competition. The Games serve as punishment for a rebellion staged by its citizens 74 years prior. Only one victor remains after being thrown into an unforgiving arena. Ludwig’s character Cato is Katniss Everdeen’s (played by Jennifer Lawrence) biggest rival, the story’s protagonist. (Read our Hunger Games review – if you dare.)

I was able to catch up with the newly appointed teen heartthrob just days away from the film’s world premiere. As excited as he was about being a pivotal member of the blockbuster, he seemed equally enthralled to be back in B.C., his home province. Apparently he’s been missing its clean air and sprawling greenery since leaving over a year ago to join the theatre program at the University of Southern California.

Sure, he’s been enjoying the company of his cast members and other celebs like Mark Foster (from Foster the People) at James Franco‘s bar Writer’s Room in L.A. (and dodging TMZ cameras along the way). But he proudly maintains, “Vancouver is the best city in the world. Absolutely, hands down… What other city can you come to that’s just so fresh and the people here are so friendly and the quality of life is so amazing. I think that’s what makes us who we are.”

He’s gone the distance since his days in West Vancouver’s Collingwood School, appearing with high profile stars like The Rock in Race to Witch Mountain. Yet still can’t seem to wrap his head around all the screaming girls just waiting to catch a glimpse of him while on the Hunger Games promotional trail.

Surprised by the adoration from countless fans for the nefarious part he plays in the movie, he says, “It’s been super flattering. It’s really nice to be acknowledged for your work… Even this morning, going to a radio station, I had these girls following me. I wouldn’t wait five minutes for me, like I don’t really understand how this is happening!”

As modest as he was about the blushing teens waiting to pounce, he speaks confidently about the amount of physical and mental preparation he put into the role. A competitive athlete at heart, the physical aspect didn’t seem as much of a challenge. Like the “tributes”, as they’re called, chosen to fight to the death in the film, he speaks of how the young actors sized each other up as soon as training began. “We were all duking it out from the beginning… We had relay races and stuff, and it was all in good fun. But I’m a very competitive person at heart and that’s one thing (about his character) that I did relate to.”

Luckily, he also had the help of author Suzanne Collins and director Gary Ross to help him see the internal conflict that his character would have to project – being a heartless killer but one that was raised with this mentality as a means of survival. That’s some heavy material for a series geared towards young adults, something Ludwig was very aware of since signing on to the project.

He admits, “The reason I took the role was because of this one scene at the end of the film where you really see, even for a second, a glimpse of humanity in Cato. It kind of just goes with the whole message of the movie, which is really just hope. You know, hope that everyone will one day realize their faults and there’ s more to people than meets the eye. And I think Cato is in a way a little misunderstood… Even though what he was doing was horrible and unforgivable, you kind of see where he’s coming from.” 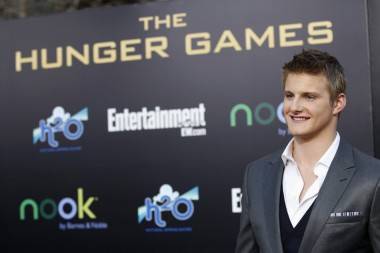 Digesting the film’s themes, you can not help but notice the similarities between our generation’s fixation on reality TV series and the hoopla surrounding the Hunger Games (also referred to as a “pageant”) in the story’s world. Ludwig draws a comparison between the two, saying, “Really, Suzanne Collins got the idea for these novels by watching a reality TV show… And then she switched to the news and the war in Afghanistan was on…”

He continues, “Our world is going down a weird road and there’s something to be said about a TV show that’s getting so much popularity because other people in the audience enjoys watching people fail. The movie made me take a step back and realize there aren’t enough shows that are applauding peoples’ successes… Those are the shows we should be watching. Not the Kardashians.” Honestly, wiser words could not be spoken.