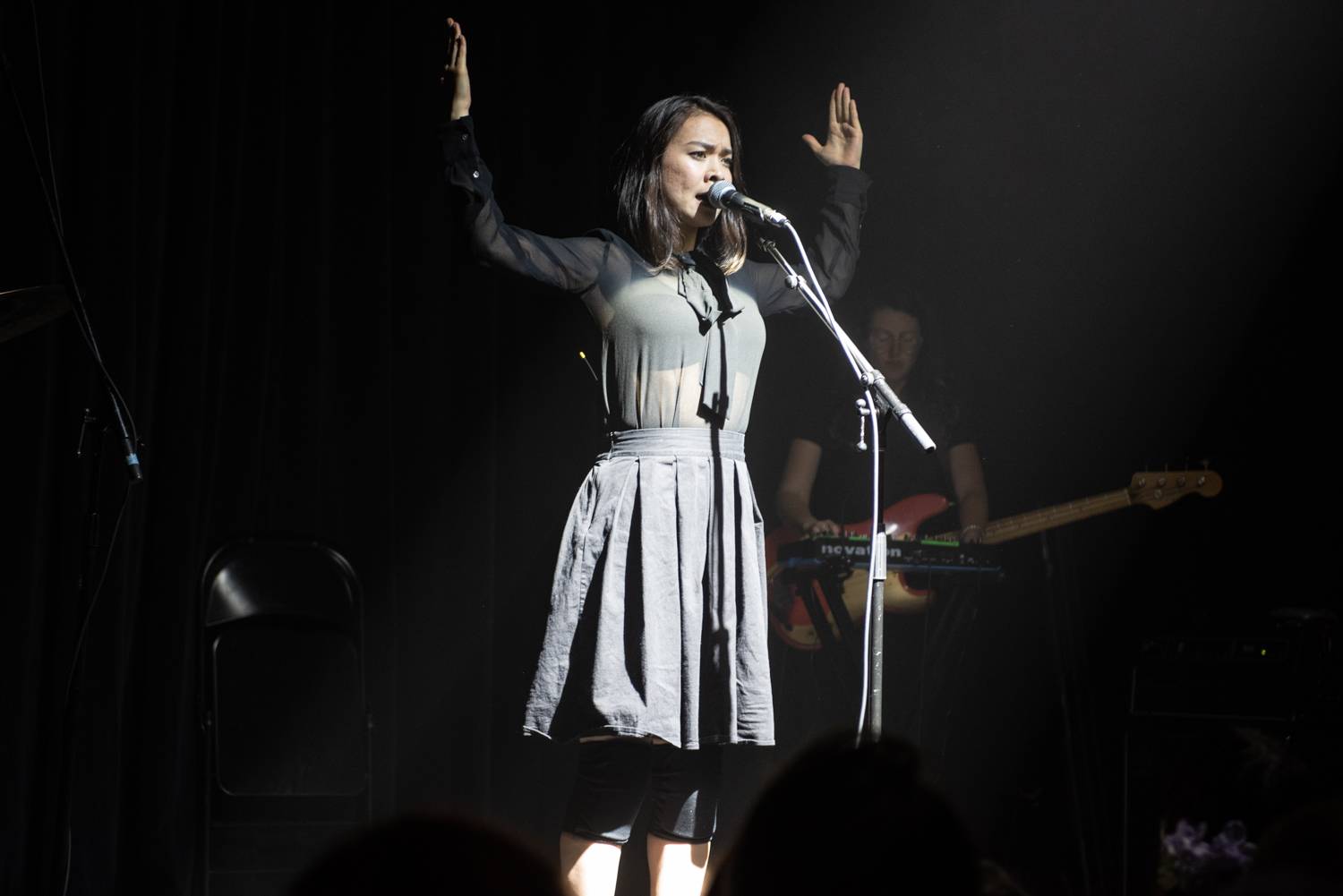 Review and photos—Mitski at the Imperial, Vancouver, Oct 30 2018

Excited fans swarmed the Imperial on Tuesday night in anticipation for one of the most talked about artists of 2018. Mitski Miyawaki, or just plain Mitski, has made a name for herself in indie-rock. Her incisive lyrics tap into the most human of insecurities. Her fifth album, Be the Cowboy, takes this unguarded approach even further. During her live show, it became clear that all the hype surrounding the artist is completely justified.

A trio of millennials called Overcoats opened. Hana Elion and JJ Mitchell, two college friends from New York, came to Vancouver with what appeared to be a precalculated routine. The electronic duo, performing with a drummer, seemed comfortable on stage. But a few concert clichés made their way into the performance. There were enough hair whips, synchronized, dorky dance moves, and premeditated jokes to make you cringe. In spite of this oversight, the girls had plenty of talent to back it all up. Their voices harmonized to create simple but memorable songs. The girls radiated charisma and managed to keep some entertaining banter going throughout their set.

Be the Cowboy Tour

By the time Mitski took the stage, the venue was overflowing with eager concertgoers. Stone-faced and dressed in black, the headliner stood still with hands behind her back for the entire opening number, “Remember My Name.” With a four-piece band backing her up, Mitski ditched her guitar for the night to emphasize her elegant vocals. Her hardened expression remained during the first few songs before she broke the facade to warmly greet the audience. “Hi. My name is Mitski. Thank you for coming tonight,” began the songstress. “I don’t remember: where did I play last time?” A third of the crowd immediately shouted, “The Biltmore!” in reply. It was nice to see that, for the most part, devout fans populated this sold-out show. Mitski grinned before she and her band began to play “A Pearl” from her latest release.

Amongst the audience, a handful of people donned Western gear as a nod to the “lone cowboy” theme of Mitski’s recent album. But while the show was part of the Be the Cowboy tour, it included songs from throughout the musician’s entire oeuvre. This meant some “deep cuts” from her early years. The audience seemed delighted in hearing Mitski sing songs from previous albums like 2014’s Bury Me at Makeout Creek. “First Love/Late Spring,” a blistering wound of a ballad, prompted several to sing the lyric, “Lately I’ve been crying like a tall child.” Likewise, people were responsive when Mitski performed her newer work. During “Nobody,” everyone seemed just as enthralled by the disco-infused beat as they were by Mitski’s more melancholic tunes.

Theatrics, humility, and a salute to Iggy Pop

Without a guitar to shield her, Mitski was able to communicate the crushing vulnerability of her songs. For the one-hour performance, the singer posed, flailed her arms, paced around, and even lay on the floor. Though sometimes strange, her choreography was never clumsy or aimless. Every facial expression, hand gesture, and outstretched limb seemed intentional. Mitski bounced to electropop songs like “Washing Machine Heart” and thrashed around to grungier numbers like “Dan the Dancer.” Either way, her movements gave new life to her compositions.

After diving and plié-ing to “Your Best American Girl,” Mitski acknowledged the overlooked, humble moments of a live show. The idea came to her, she recounted, when she saw Iggy Pop perform. During one song, the legendary punk rocker slammed his mic across the stage, only to walk over to “sheepishly pick it up” once the number finished. “It was the greatest thing I’d ever seen in a live concert and I wanted to bring that spirit tonight,” she admitted. As a meticulous performer, those small things mean a lot to Mitski. She made sure that we all took notice.

In spite of her esoteric theatrics and cool, cowboy persona, Mitski is still a humble artist, grateful for the chance to make music her own way. “This really is the best job in the world,” she said. “I couldn’t do it without you guys. Thank you so much.” If the few, teary-eyed faces in the crowd were any indication, it should have been us thanking her.

Photos—Mitski at the Biltmore Cabaret, Vancouver, 2017

More photos (the first eight are of Overcoats):