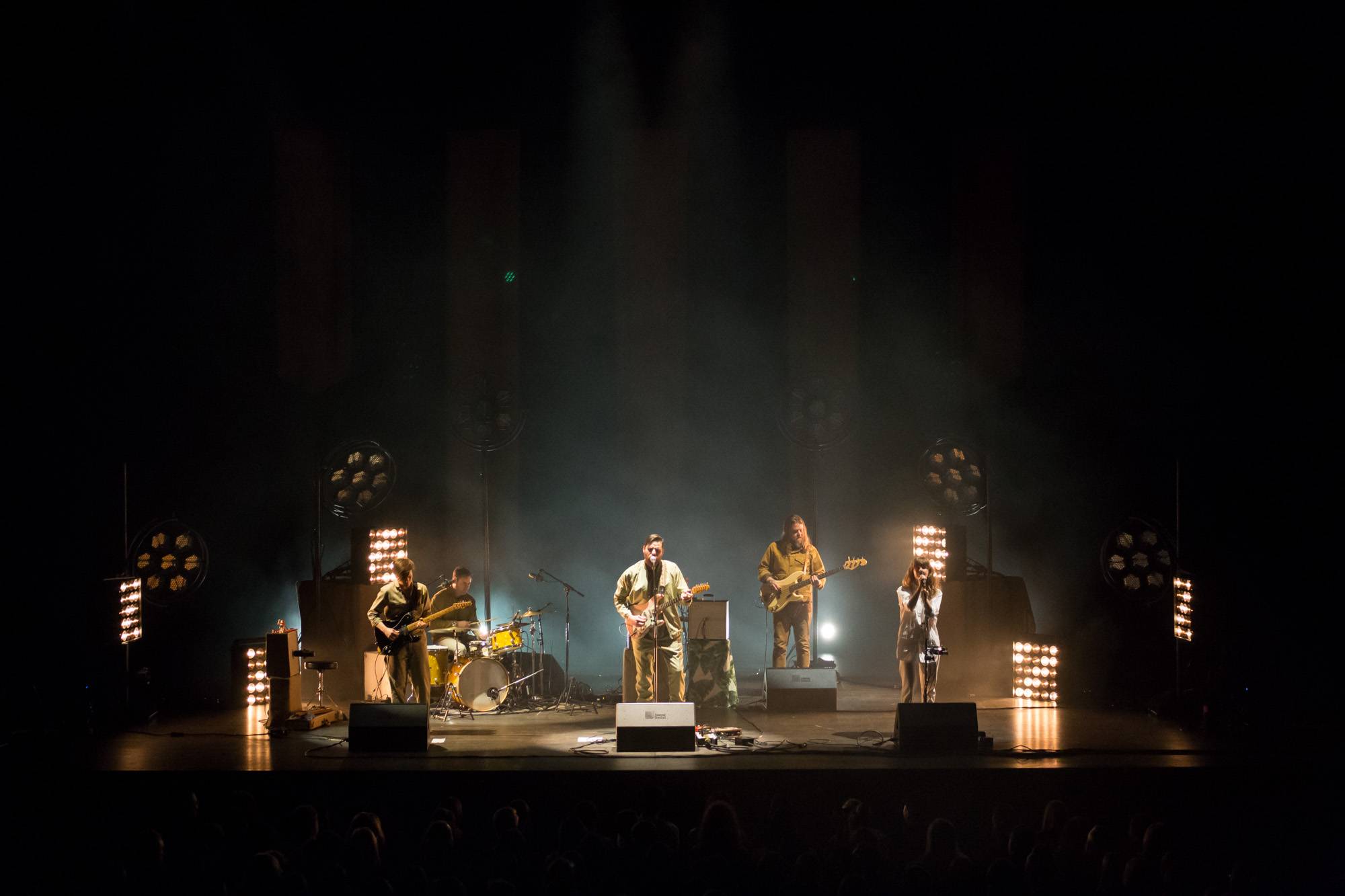 Review and photos–Bahamas at the Queen Elizabeth Theatre, Vancouver, Mar 1 2018

Bahamas bought a much needed dose of warmth to Vancouver for one special night at the Queen Elizabeth Theater on March 1. The band is on tour supporting their fourth studio album Earthtones, which dropped on Jan. 19. The album features frontman Alfie Jurvanen’s strongest writing to date, thanks to a neo-soul update of his folksy songs. The initial record sessions were done with legendary bassist Pino Palladino and drummer James Gadson, who have been a major part of D’Angelo’s soulful sound. You can hear their influence woven throughout the new material, from the driving percussion of “Everything to Everyone” to the syncopated guitar licks on “Way with Words”.

Although Jurvanen is the driving force behind the group, Bahamas is very much a band, and a very talented one at that. The five members effortlessly sailed through the songs, with guitarist Christine Bougie and vocalist Felicity Williams getting plenty of time to shine. Holding down the back end were Darcy Yates on bass and Jason Tait on drums. Content to stay in the background, the two of them did an admirable job anchoring the songs. The wardrobe coordination was a nice touch too, with all the band members dressed in various shades of muted greens, browns and white (i.e. earthtones. Get it?).

The set was heavy on new tracks, but with a bunch of favorites like “Lost In The Light” and “All The Time” plus some deep cuts as well. Being able to do so much with so little is a Bahamas trademark, with every element place just so and each track given ample space to breathe. I have to confess I’m not that familiar with their back catalog, but there was never a dull moment throughout the show.

One of the marvelous things about Bahamas’ music is that they are often about the struggles of being human–depression, heartbreak, relationships–but always delivered with a wink and a laugh. The warm summery vibe of their music is the perfect salve to lift your spirits, and the crowd was very much copping those good feels. At one point Jurvanen paused to announce that it was vocalist Williams’ birthday, and it sounded like he was going to lead everyone in singing “Happy Birthday”. Before he could even finish speaking, the crowd had spontaneously erupted into a raucous rendition.

The band’s sense of levity was also evident in their hilarious introductions to their songs. “Show Me Naomi” began with Jurvanen saying it was “a song about how awesome my wife is and how crappy I am.” The encore opened with a solo rendition of “No Depression”, which was introduced as a “real toe-tapper.” He had the entire crowd up out of their seats, laughing along, which isn’t something you normally expect from a song about not being able to get out of bed because you feel like shit.

Standout track “Bad Boys Need Love Too” began with a backstory about Jurvanen’s father, who left when he was still a baby. Acknowledging that his father’s absence had a big impact on his life, Jurvanen went on to list both the negative and positive things that came about from it, including his use of music as therapy. The song is about (and I quote) “daddy isssues”, but Jurvanen also took the opportunity to ask the audience to extend their empathy and compassion to all of the bad boys in the world, “including those in the highest office”. There are many artists that direct rage against the political establishment, but not too many who ask to spread love instead. That would have sounded cheesy coming from almost anyone else, but Jurvanen made it work. His ability to take listeners to a warm, fuzzy place is what makes Bahamas so compelling. Here’s hoping the band comes back soon.