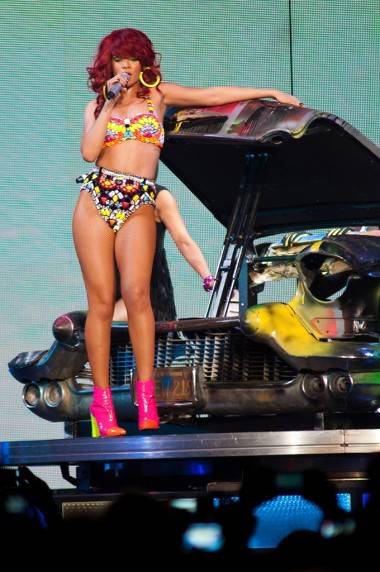 “Rihanna’s previous tour, the extremely successful “LOUD” Tour solidified Rihanna’s status as one of the top female solo artists of this century. The LOUD tour grossed 90 million worldwide to become the 7th highest grossing tour of 2011 and included a historic 10 Sold Out concerts at London’s O2 Arena – a first by a female solo artist.

“As the recipient of a phenomenal 6 Grammy Awards, Rihanna has sold over 37 million albums and 146 million digital tracks worldwide, and currently holds the record for top-selling digital artist of all time. In 2012, Forbes crowned Rihanna as the #1 social networking superstar with more than 60 million fans on Facebook and 25 million followers on Twitter in addition to owning over 2.7 billion views on YouTube/VEVO – the most for any female artist. Rihanna’s impressive catalogue of hits includes 11 #1 singles, including “We Found Love” which spent 10 weeks at #1 on the Billboard Hot 100, 18 #1 singles on the Billboard Dance Club Song Charts, and 22 top 10 singles.”