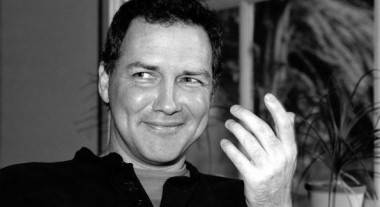 “Hey, hey, … relax,” Norm MacDonald said early on in the set, “I don’t want to polarize the audience – not yet.”Â  Of course, MacDonald has always seemed to enjoy provoking extreme reactions. During his time (1994-97) as “Weekend Update” anchor on Saturday Night Live, in the show after O. J. Simpson’s acquittal, he opened with: “Well, it’s official – murder is legal in the state of California.”

Friday night at the Red Robinson Show Theatre in Coquitlam, MacDonald definitely did provoke, and did not disappoint.Â Â  “They call Tiger Woods a ‘sex addict’ – or as I call it, a man.” Huge howls from the packed auditorium. “I mean, if you’re an addict, like an alcoholic or something, it’s how much you drink, right? So one guy has sex all the time with one woman, his wife –Â  another has sex with lots of different women – it’s still the same amount of sex, right? It’s like how much you drink. It doesn’t matter if it’s from different glasses!”

Quite a comparison. And it went on like this all night – odd comparisons and non sequiturs second to none. If, as G.K. Chesterton observed, “Every good joke has a philosophical idea inside it”, Norm MacDonald is quite the philosopher – and a morbid one at that. Topics like murder, cannibalism, and death received serious but funny consideration. “There are words you don’t want on your death certificate, you know? Words like ‘massive’ and ‘complications’. The doctor says it’s going to be a simple operation, but you die of ‘complications’!”

MacDonald considered the tragedy in Haiti. “All those people. I should feel something. It’s like I’m sad I’m not sad. But I only have so much sadness, and most of it’s for me.”

“Happiness is a tough thing!” MacDonald said at one point. Thing is, MacDonald’s unique humour talks about the tough things in a way that makes you happy.

4 responses to “Norm MacDonald at the Red Robinson Show Theatre”