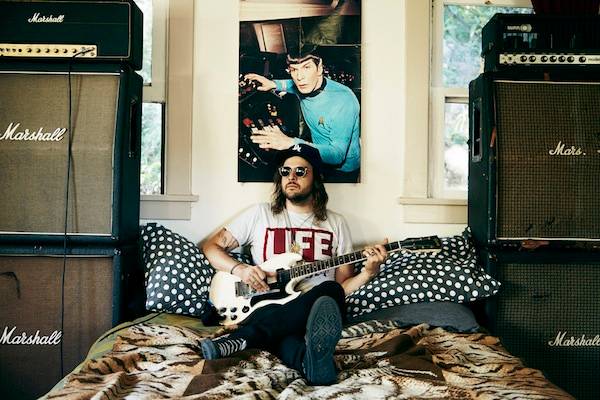 Mid-way through his set at Fortune Sound Club last Thursday night,Â King Tuff, aka Kyle Thomas, took a long swig from his water bottle with his pinky finger extended and wiggling at the audience. Aside from this mocking pseudo-royal gesture, Tuff made no other reference to his self-appointed garage rock lineage over the course of his hour-long set. Unless you count his “King Tuff”-emblazoned, pinned and studded vest.

Less like royalty than the stoner-punk hick cousin of Montrealer King Khan or extended family of Atlanta, Georgia’s The Black Lips, Tuff had plenty of spunk and fuck-all attitude. The greasy young punk demonstrated his penchant for outcasts and debauchery with dedications to all the “freaky Canadian motherfuckers” (“Freak When I’m Dead”) and a “love song to the middle finger, in general” (“Staircase of Diamonds”).

The dedications extended to bandmate bassist Magic Jake who whistled “like a fucking songbird” for the interlude to “Eddie’s Song”. Jake’s talent for avian melodies cued the first of the crowd surfers. A gnarly wipeout left the fan limping and crumpled in a heap on the dance floor in a safe distance from the moshpit, but didn’t discourage him from skipping back into the thick of dancers for the encore and final number “Alone and Stoned”. Clearly, despite Tuff’s young age (early thirties) and career (the band just released its third official album since 2008’s Was Dead), the musician’s power of influence over the audience was strong.

Tuff intermittently shrieked, howled and grunted like a man possessed by the very hex that his latest album Black Moon Spell, released on Sept. 22, is named after. The band, rounded out by Garrett Goddard on drums, showcased the new album along with older hits like the psychedelic, winding “Sun Medallion” and “Bad Thing.”

Throughout, Tuff’s singing voice maintained its signature twee nasal pitch that resonates with the current generation of Sub Pop and Burger Records followers, along with labelmates Metz and Nobunny. This vocal quality of eternal youth lends itself perfectly to the genre of dumb summer-y garage-rock.

Despite setbacks with the opening band’s sound check that delayed the show, front woman Katy Goodman of Los Angeles garage-rock band La Sera was all smiles. The former Vivian Girl bounced, blushed and hair-tossed through feedback, a broken guitar string, and inadequate volume on her warbling vocals. For theÂ band’sÂ encore, Goodman stepped into the audience to rock out and whip her Brigitte Bardot-esque locks along to “Hour of the Dawn” the title track off this year’s LP release. This prompted a blushing young man and a few young girls in the front row to shimmy and shake along with her in girl-power solidarity.