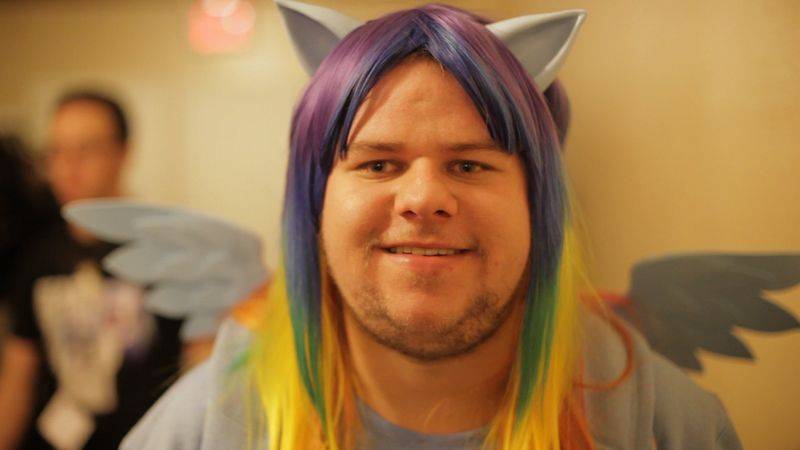 A Brony Tale features this guy.

– by Michael Nevada and Ria Nevada

WithÂ opening weekend havingÂ just passed, DOXA still has a week left of programming (’til May 11). Snipe reviewers Ria Nevada and her bro Michael look at some of the docs at Vancouver’s 2014 Documentary Film Festival.

A Brony Tale -Â A Brony Tale follows Â Ashleigh Ball, aÂ local voice actress (for My Little Pony: Friendship is Magic) and musician (Hey Ocean!)Â on her journey into the world of BroniesÂ -Â a largely male fanbase that shares a fanaticism for the show/toy line My Little Pony. Like Trekkies, the documentary delves into the world of a specific subculture and shows the quirkiness and sense of community a piece of media can create. From Dustykatt, deemed the “manliest brony in the world” to Bryan, a soldier who rekindles his passion for drawing through My Little Pony, the documentary takes a lighthearted look into what fandom is and the imagined communities it creates. At the end of the day, people like what they like and there’s nothing wrong with that, and the film, at its heart, is a love letter to fandom.

Emergency Room: Life and Death at VGH -Â Ever wonder what it’s like to work in a hospital? The six-part Knowledge NetworkÂ series Emergency Room:Â Life and Death at VGHÂ follows the doctors, nurses, and operators of Vancouver General Hospital as they tackle varying degrees of medical treatments. From patients being stabbed in the chest to dealing with inebriated patients with broken arms, working in a hospital is truly eventful. Ultimately, the show focuses on the staff of VGH and how they deal with life and death. A word of warning, though: Emergency Room isn’t for the faint of heart. But for those who can take it, the seriesÂ does a good job of balancing the medical cases with the very human relationships of the Vancouver General Hospital staff.

Unplugged -Â Mladen Kovacevic’s debut feature is a captivating look at the lost art of playing the leaf in rural Serbia. The film opens with a sequence of Belgrade bands playing of lo-fi grunge, metal and jazz in a dark, industrial rehearsal space then transitions to the sounds of the rustling leaves and whistling winds of the country’s beautiful rustic countryside. It follows the enigmatic Vera – a middle-aged former Germanian private detective and accomplished player of the leaf. She is one of the leaf mentors of Unplugged’s protagonist Josip, a fumbling musician who despite having mastered over 20 instruments, can’t seem to reproduce a coherent melody himself. We see Josip struggling with the ancient instrument until he is blue in the face, and surrounding character sketches establish how urbanity, technology, and even global warming is wiping out a dying tradition.

Mirage Men – The secrets of Area 51 are apparently more insidious than alien abductions. Mirage Men cleverly uncovers how the US government attempted to conceal military experiments by proliferating UFO mythology amongst scientists and journalists in the 1980s. Their innoculation practices are exposed through engrossing talking head interviews and narrative vignettes – strewn together through archived UFO film reels and news clippings. Former special agent and chief disinformant Richard Doty confesses his part in this national cover-up, and a few of his colleagues chime in on this incredible hoax. However, as the film unravels, viewers start to question whether these agents’ admissions can be trusted. Fans of investigative documentaries – in the vein of Errol Morris – and conspiracy theory enthusiasts will have a field day with this revelatory film.