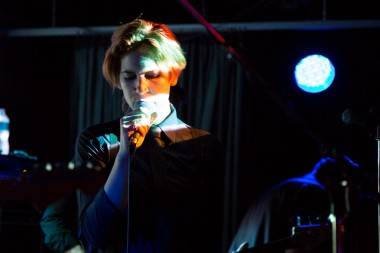 Young Galaxy at Electric Owl Thursday night in Vancouver. The band is on tour for its latest album Ultramarine. The album was shortlisted for this year’s Polaris Music Prize.

The packed Vancouver show was the last on the Canadian leg of the tour. The band continues its tour in the U.S. until Nov. 10.

According to Alan Ranta, writing in Exclaim!: “…Â the band turned the club out with a tight, loving performance of electro-pop delivered with pop punk enthusiasm, fighting their way through early bouts of feedback good naturedly.” The group ended with an encore of Erasure‘s “A Little Respect”.

Young Galaxy was formed in 2005 in Vancouver, but is now based out of Montreal. Members are Stephen Ramsay, Catherine McCandless, Stephen Kamp, Matthew Shapiro, and Andrea Silver.