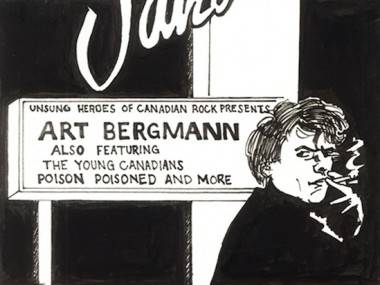 I thought this one was going to kill me…

I’ve been working on it more or less off and on since seeing Art Bergmann perform at the WISE Hall on Canada Day a month ago. The more rumours I heard from the people there about the Vancouver singer the more interested I became.

I’ve been living in Vancouver since about the release of his first “solo” album, Crawl With Me, but what I remember most is Sexual Roulette, with the “Bound for Vegas” single and some really electrifying tunes (“Dirge #1”, for example). I didn’t follow Art’s career much after that though, and I’m not sure I ever did see him live. So the Canada Day show was a chance to rectify that situation.

The comic strip, meanwhile, was a way to try and separate the Man from the Myth.

For that, I am indebted to everyone who wrote about Art, including John Mackie and John Armstrong, as well as the curators of the Bergmann fansite, ArtBergmann.com, who posted a befuddling amount of press on the man.

Also thanks to Sherri Decembrini, Art’s wife, who answered some questions when I got stuck (i.e. “the missing years,” when Art was in Toronto).

And thanks to you for reading!