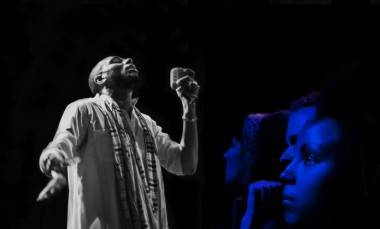 Reports photographer Jess Desaulniers-Lea, “His set was as eclectic as his openers – from Poppyseed,Â a sparse Vancouver hip-hop soloist that included two hip-hop dancers as accompaniment, to Batuque AxÃ©, a fusion band that focused on Brazilian style music and included dancers adorned in feathers and beads, capoeira dancers dedicating a song to Nelson Mandela.”Â Batuque AxÃ© also played with Bey at the Victoria Ska Fest on the weekend.

“Mos Def also presented an eclectic set, stage dressed in potted orchids Â – with no musicians – only two DJs backing him. There was everything from bouts of a cappella rap from his songs to Marvin Gaye sampling from ‘What’s Going On’ after his dedication to Trayvon Martin, the recently slain African-American teen in Florida, who died at the hands of George Zimmerman, who was found not guilty on the Saturday before the show.

“The whole set was entrenched not only with the aftermath of the slain teen, but also with the last two decades politically in America – it is clear that Mos Def not only requires his audience to listen to hip-hop but to be participants; his performance had a sense of earnest but harsh urgency for us to be socially conscious and to be engaged.

“He said ‘The wicked is soon upon us….in fact it’s already here’ and told us ‘Don’t let the great thieves take your joy.’ And in the most genuine sense bluntly stated ‘Fuck your entertainment,’ as if to say this is a crucial era in which to not be disengaged with the world around us and that our survival is dependant on it.”

The hip-hop artist/actor has been in the news recently, as a result of his force-feeding in support of Guantanamo detainees. This follows a hunger-strike begun earlier this year on the part of a group of the detainees (“more than a hundred” Â of the “approximately a hundred and six of the hundred and sixty-six held there,” according to The New Yorker.)

In collaboration with London-based human rights organization Reprieve and director Asif Kapadia,Â Bey has created a video to demonstrate the practice of force-feeding. In it,Â he is strapped into a chair and has a feeding tube forcefully shoved down his nose. You can see the disturbing video at The Guardian.