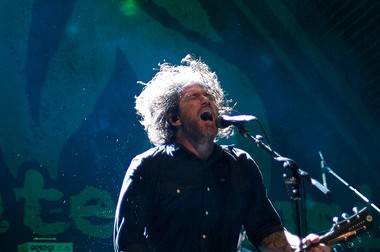 The Gainesville, Florida band reached their highest charting position to date, number 33 on Billboard Top 200, with the record. Rolling StoneÂ stated that “[Exister] finds the quartet returning to their roots in aggressive, emotionally volatile music.”

HotÂ WaterÂ MusicÂ have been together for nearly 20 years, since the members first played together in 1994. Chuck Ragan, Chris Wollard, Jason Black, and George Rebelo make up the band, which takes its name from the title of a Charles Bukowski book.Â Beginning in 2005, the band went on a hiatus which ended only recently, with the release of Exister.

Reviewing the Hot Water Music Vancouver show in Exclaim!, Jason Schreurs wrote, “Ever have that moment at a show when you are dancing or moshing and amazing friends grab you in the pit at precisely the right moment to scream that perfect song lyric in your face? This show was filled with those moments.Â Exister‘s tale of rebirth, ‘Paid in Full’, brought friends all over the venue together for a transcendent sing-along.” The two-song encore included a cover of The Bouncing Souls‘ “True Believers”.