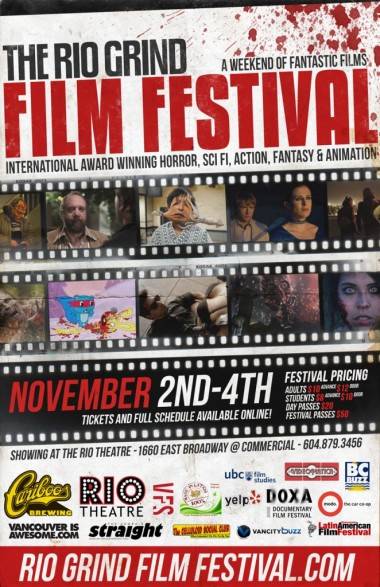 Flesh-eating sushi and a mind-scrambling drug called Soy Sauce are just a few of the tasty, messed-up offerings for this weekend’s Rio Grind Film Festival. Also on the menu: an extraterrestrial bluegrass duo, a sexy Chilean assassin, and lots of cosplayers.

“The Rio is all about fun pop culture, irony, cheese and campy horror or straight-up gore,” Rio owner Corinne Lea told The Snipe about what makes the Commercial Drive institution the perfect fit for the festival that’s celebrating sci-fi, action, horror, and all things genre. Lea also noted that it doesn’t hurt that you can enjoy all the Grind weirdness with a cold beer.

Ten genre films from around the world will be featured in the eclectic cult fest, Â along with a spooky slate of short films and Spike & Mike’s patently sick and twisted animation. 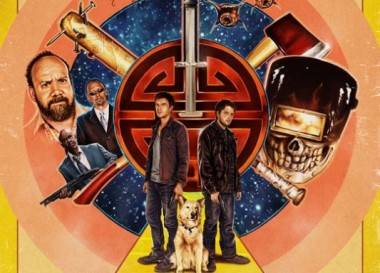 Spoiler: John Dies at the End

Highlights of this weekend’s fest include tomorrow night’s B.C. premiere of John Dies at the End, the latest from Don Coscarelli (Phantasm, Bubba Ho-Tep). Adapted from David Wong‘s cult novel, Â hopes are high for this flick from the cult director who introduced the Tall Man to the world, and got Bruce Campbell to fight a mummy dressed as Elvis.

Friday night’s Dead Sushi screening also promises to be a highpoint for the fest. The kinetic, super-silly Japanese splatter flick with killer sushi Â features some pointed jabs at sushi culture, but is anchored by the high-kicking Rina Takeda and the scene-stealing egg sushi, Eggy. 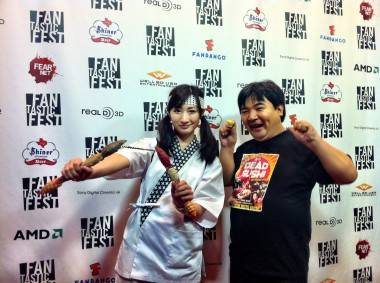 “It’s one thing to watch a movie about killer sushi at home alone on the couch, a totally different experience entirely when you’re in a room full of people having the same reaction at the same time,” said Rachel Fox, who’s been getting word out on the fest. “Movies are meant to be a communal experience and the atmosphere of these festivals are buoyed by the people themselves. It’s very much a tribal gathering.”

Saturday night’s The American Scream is another winner. The documentary is the perfect Halloween hangover, following three obsessive “home haunters” in a Massachusetts neighborhood, as they transform their suburban abodes into deathly (and kitschy) thrills. Directed by Michael Stephenson (Best Worst Movie), the film takes an unassuming premise and turns it into a sweet, funny — and stressful –portrayal of how the “haunting” obsession affects the subjects, their family and community. (Also, the father and son team are scene-stealers of the highest order, and worth the ticket price alone.)

Closing things out on Sunday night is Vanishing Waves, a dark, psychological sci-fi flick that won the audience award for Best Film at this year’s Fantastic Fest.

If that’s not enough, the Rio Grind Fest is also screening docs about cosplay and a special effects studio. And there’s History of Future Folk — a comedy about bluegrass-jamming aliens, and some super-fun sounding films that seem worth viewing for their titles alone; Manborg and Bring Me The Head of Machine Gun Woman. Crime-comedy Smoked will also debut with director Jamie Dewolf on hand.

While Lea cites the Toronto After Dark Festival, and other genre fests around the globe as an influence, Vancouver already has achieved solid cult cred on the circuit, and Â we’re due for a fest like the Grind in Vancouver. At September’s Fantastic Fest –- America’s biggest genre fest — the Twisted Twins, aka Vancouver filmmakers Jen and Sylvia Soska,Â were on hand with their latest, American Mary. Local director/comic book artist Kaare Andrews brought to life a futuristic Vancouver, with a Mega-City One vibe, in the dark anthology The ABC’s of Death, and Panos Cosmatos’ Beyond the Black Rainbow even got its own Mondo posterÂ launched at the fest.

For the schedule and tickets, head to the Rio Grind Festival’s site.