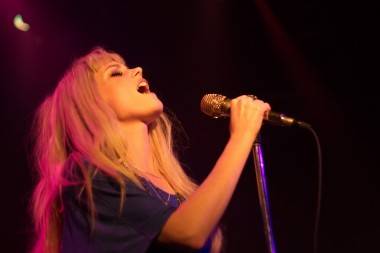 This was the Danish band’s second show in Vancouver this year. Asteroids Galaxy Tour played the same venue Feb 19 2012.

Of that show, The Snipe’s Ria Nevada wrote in her review: “The psychedelic funk duo fronted by vocalist and blonde bombshellÂ Mette LindbergÂ brought along an enthusiastic rhythm and horn section on their North American trek, creating the ultimate party band… here promoting their sophomore record,Â Out of Frequency, a solid follow-up to the contagious debut,Â Fruit.Â Last night’s show happened to be the last stop of the fun train, and Lindberg and company made sure that their fans got down and dirty for the finale.”

Lindberg co-founded the band with bassist/songwriter Lars Iversen in 2007. A substantial break came when Heineken used the Asteroids Galaxy Tour song “The Golden Age” in a 2010 commercial.

Writing in the Georgia Straight about the band’s Oct 25 Venue show in his review “Asteroid Galaxy Tour Lights Up Vancouver“,Â Mike Usinger noted that the bar was only half-full on the rainy night, and that it took awhile before the show really caught fire. Four songs in, he writes, “the crowd went semi-apeshit for ‘Around the Bend’, Lindberg responding by swinging her mike stand around while launching her own one-woman dance party. Tower of Power horns came courtesy of trumpeter Julien Quinet and trombonist Tony Rinaldi, while bassist Lars Iversen grounded everything with his steady bass work.”

Usinger also writes that he expects the band’s “recognition level to change sooner rather than later, as the good-times sextet, led by blond dynamo Mette Lindberg, proved that it’s gunning for more than 15 minutes (or, more accurately, 30 seconds) of ad-campaign fame.” 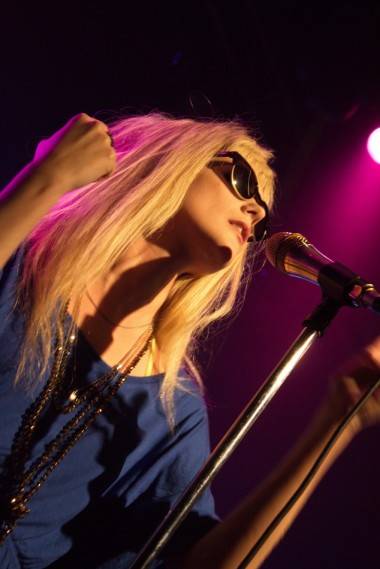