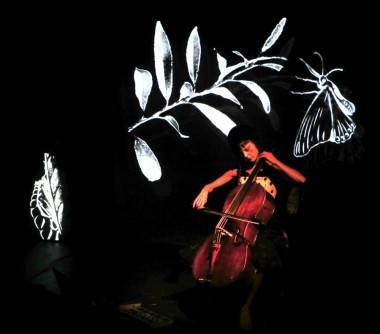 Eidolon, a production by Melbourne-based Nervous Doll Dancing, is a handmade dreamscape of a show.

In the production, cellist Francesca Mountfort takes centre stage to play her original compositions, hypnotic, dreamy pieces, as artist Tom Hume creates a visual background using light projections of haunted puppets, animation, and film on three screens at the back of the stage. One of the screens hangs just behind and above Mountfort, while the other two are props – a white guitar case and an umbrella –Â  remain at stage left and right and provide unusual surfaces for the projections.

Doll faces appear to change expressions as Mountfort’s cello music casts emotion into their static features like a spell.

“I suppose the show is about life, cycles and the inherent beauty in the ephemeral and fragile nature of life,” Hume told us after the performance. “Time, memory, nostalgia, strength, hope, courage and spiritual freedom are all in there somewhere.”

Eidolon demands interaction between the audience’s imagination and the show. It helps to know that an “eidolon” is, in ancient Greek thought, an apparition or an image of the spirit of a living or dead person. More simply, it’s an idealized image of a being, like a phantom.

The production is beautiful. Fragile, vivid, and hypnotic. Both people are talented artists, in touch with their inner beings and able to find a voice for their dreams.

But if you’re not one to get involved with your dreams, you might have a hard time understanding Eidolon. “Understanding” is the wrong word, too, because to enjoy the show, you must be able to let go of linear storytelling.

But for fans of cello music who enjoy a good daydream, this is definitely the show to see.